The current thematic focii of the Center’s research and programs are:
• Urbanization
• Economic Inequalities and Change
• Pluralism and Diversities
• Democracy 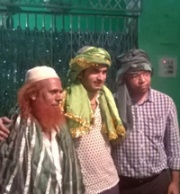 Bhrigupati Singh Explores the Social and Cultural Aspects of Wellbeing

Assistant Professor of Anthropology Bhrigupati Singh spent his 2015-2016 sabbatical year conducting ethnographic research on mental health and illness, as a Visiting Faculty member at the Department of Psychiatry of the All India Institute of Medical Sciences (AIIMS, Delhi). While Singh’s proposal was framed around the cultural life of diagnostic categories, such as depression and anxiety, the actual research became wider in focus. Patient interviews during ward rounds at AIIMS led Singh to a community clinic in the lower-income neighborhood of Trilokpuri (in East Delhi), described by news media as a “riot laboratory” of contemporary India. Forms of subjectivity, tensions and everyday life in this neighborhood became a major focus of Singh’s research. In Trilokpuri Singh also continued his longstanding interests in spiritual healing, in particular working with a popular healer in the neighborhood known as "Sufiji," who took him on a journey to a Sufi Muslim shrine in Badaun, Uttar Pradesh, one of the leading sites for the treatment of mental/spirit afflictions in north India. Singh made numerous visits to Badaun with Sufiji, including one visit where they took along a team of psychiatrists from AIIMS to study the kinds of clinical diagnoses one might find among treatment-seekers in a shrine such as Badaun. Gradually, Singh realized that the ethnographic journey between AIIMS, Trilokpuri, and Badaun was not random. Rather, in what is globally beginning to be called the "post-asylum era," this journey between hospital, home, and shrine is quite common and may even be the norm for mental health trajectories in India. To further examine concepts of the normal and pathological in popular culture, Singh also teamed up with a filmmaker to create an archive of film and media material related to mental health (available at indiancine.ma). Singh is now at work on his next book, tentatively titled Lunar Enlightenment: Essays on Life-Force.

Singh's research was funded by the Wenner-Gren Foundation for Anthropological Research, the American Institute for Indian Studies, CCSA and the Watson Institute.

In 1951, India was a mere 17.3 percent urban, and only five Indian cities had populations greater than 1 million. By 2011, three cities – Mumbai, Delhi, and Kolkata – had more than ten million people each, and 53 cities had populations of more than one million. Depending on what measures are used, India’s population, 32 percent urban in 2011, could well be over 40 percent urban over the next 15-20 years, if not higher. The latest Census shows that for the first time, the absolute increase in urban population during 2001-2011 exceeded the increase in rural population in any ten-year period since independence.

As India continues to urbanize, a few critical questions have to be addressed: what is the quality of citizenship in urban India? Are the rising cities witnessing the emergence of citizen consciousness and a rights-based politics, heralding a greater citizen-focused deepening of the polity? Or, do vertical patron-client ties between the political elite and citizens and other forms of dependency remain obdurately strong? Is the exercise of citizenship a function of class, caste or community as much of the literature maintains? Can citizenship lead to substantive improvements in people’s lives? Specifically, can it help improve the extent and quality of public service delivery?

Primarily because of the predominantly rural nature of Indian polity and society, the literature on urban India has remained sparse. Moreover, most of the literature has to date been largely qualitative and there have been few quantitatively informed analyses of the extent and effectiveness of urban citizenship. We need both newer conceptualizations and careful measurement.

The Jana-Brown Citizenship Index (JB-CI) project seeks to address this empirical and conceptual gap. The project covering 15 Indian cities has two aims: (i) construction of various measures of citizenship, including a citizenship index - a measurable statistical index assessing the quality of citizenship across cities and their various socioeconomic categories; and (ii) examination of the determinants of basic service delivery in urban centres. At CCSA, the project is co-led by Professors Patrick Heller and Ashutosh Varshney. Read the first report.