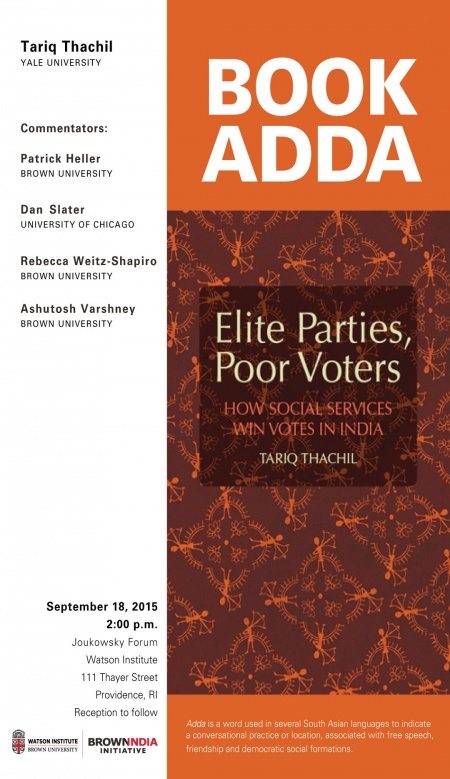 Tariq Thachil is an Assistant Professor in the Department of Political Science at Yale University, and a Research Fellow at the MacMillan Center for International and Area Studies. He holds a B.A. in Economics from Stanford University (2003), and a Ph.D in Government from Cornell University (2009). His research focuses on political parties and political behavior, social movements, and ethnic politics, with a regional focus on South Asia. Thachil’s first book examines how elite parties can use social services to win mass support, through a study of Hindu nationalism in India. The book and the dissertation on which it was based have won six prizes: the 2015 Gregory Luebbert Award for best book in comparative politics, the 2015 Leon Epstein Award for best book on political parties, and 2010 Gabriel Almond Award for best dissertation in comparative politics, all from the American Political Science Association. It has also won the 2015 Gaddis Smith Award for best first book by a Yale faculty member on an international subject, the 2010 Sardar Patel Prize for best dissertation on modern India in the humanities and social sciences awarded by UCLA, and the 2010 Esman Prize for best dissertation in Government by Cornell University. His articles have appeared in the American Political Science Review, Comparative Politics, Comparative Political Studies, Contemporary South Asia, and World Politics. His current research focuses on ethnic competition and cooperation among poor rural migrants, with an empirical focus on informal marketplaces, contract labour markets, and urban slums.

Patrick Heller is professor of sociology and international studies at Brown and the director of the Graduate Program in Development at the Watson Institute. His main area of research is the comparative study of social inequality and democratic deepening.

Dan Slater is Associate Professor of Political Science at the University of Chicago. The motivating force behind his research is to explore and explain the social and historical foundations of political order and accountability.

Rebecca Weitz-Shapiro is the Stanley J. Bernstein Assistant Professor of Political Science at Brown University and a Faculty Fellow at the Watson Institute for International and Public Affairs. Her research focuses on the quality of representation and government accountability in Latin America.

Ashutosh Varshney is Sol Goldman Professor of International Studies and the Social Sciences at Brown University, where he also directs the Brown-India Initiative.