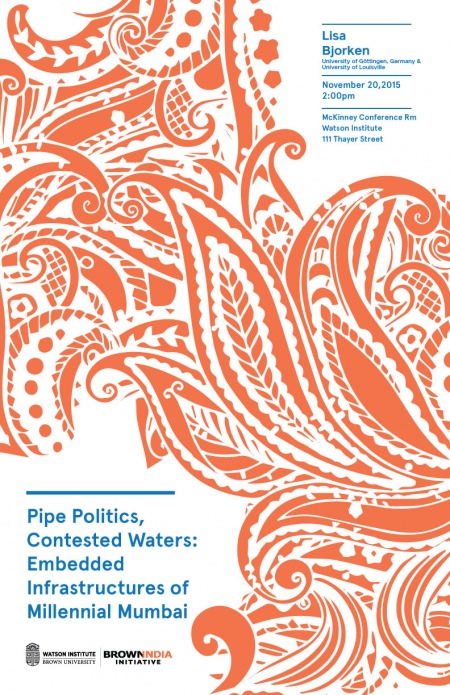 Lisa Björkman received her PhD in Politics from the New School for Social Research in 2012. So far she has taken on two big projects. The first is a political ethnography about the encounter in the Indian city of Mumbai between liberalizing market reforms and the materially-dense politics of the city’s water infrastructures, exploring the everyday political, social, and material dynamics that produce and inhabit flows of water through the growing and globalizing city. This project, which was the core of her doctoral dissertation (2011), has resulted in three journal articles as well as a book, Pipe Politics: Mumbai’s Contested Waters (2015 Duke University Press.

Pipe Politics is a political ethnography about the encounter in Mumbai between liberalizing market reforms and the materially-dense politics of urban infrastructure. Mumbai’s increasingly-illegible and volatile hydrologies, the book argues, are lending infrastructures increasing political salience just as actual control over pipes and flows becomes contingent upon dispersed and intimate configurations of knowledge, power, and material authority. ‘Pipe politics’ refers to the new arenas of contestation that Mumbai’s water infrastructures animate – contestations that reveal the illusory and precarious nature of an elite-driven project to remake Mumbai in the image Shanghai or Singapore, and gesture instead towards the highly-contested futures of the actually-existing city. Pipe Politics was the 2014 recipient of the American Institute of Indian Studies Joseph W. Elder Prize in the Indian Social Sciences.