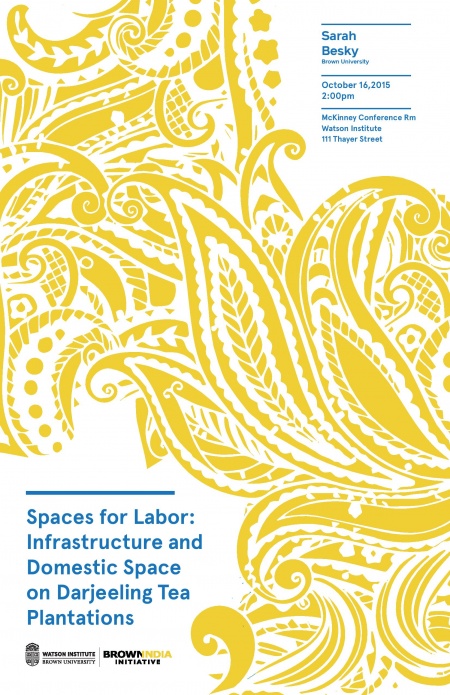 Sarah Besky is a cultural anthropologist whose research sits at the intersection of environment, economy, labor, and development. She is an Assistant Professor in the Department of Anthropology and the Watson Institute for International and Public Affair. Before coming to Brown, from 2012-2015, she was a postdoctoral fellow in the Michigan Society of Fellows.

Besky recently finished a project on life and labor on tea plantations in Darjeeling, India. Darjeeling tea is some of the world’s most expensive, but workers in Darjeeling receive some of the industry's lowest wages. Her book, The Darjeeling Distinction: Labor and Justice on Fair-Trade Tea Plantations in India (University of California Press, 2014) explores how legacies of colonialism intersect with contemporary market reforms to reconfigure notions of value—of labor, of place, and of tea itself. She asks how non-governmental forms of regulation—or “soft laws”—such as fair trade and WTO Geographical Indication, disrupt state-led efforts to integrate laborers and landscapes into global capitalism. Besky’s ethnography of ethical and regionally distinct trade is set against the Gorkhaland movement, which calls for the creation of a separate Indian state that would encompass Darjeeling’s plantations and its majority of Indian Nepalis, or “Gorkhas.” The Darjeeling Distinction won the 2014 Society for Economic Anthropology Book Prize.