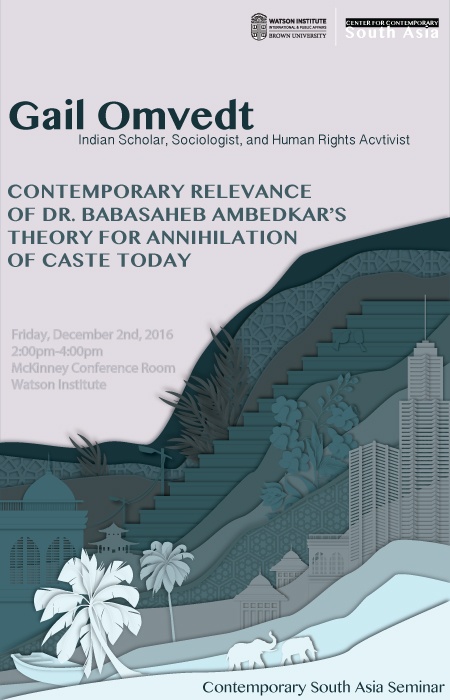 Gail Omvedt is a former Professor for the Dr. B.R. Ambedkar Chair of Social Change and Development at IGNOU.

She was born in Minneapolis, U.S.A. and has been an Indian citizen since 1983. She recieved her MA. and PhD in Sociology from the University of California, Berkeley.   She has worked actively with social movements in India, including the Dalit and anti-caste movements, environmental movements, farmers’ movements and especially with rural women.  She has been active in the Stri Mukti Sangarsh Chalval which works on issues of abandoned women in Sangli and Satara districts of southern Maharashtra, and the Shetkari Mahila Aghadi  which works on issues of women’s land rights and political power.

She has been a consultant for UN agencies and NGOs, has served as a Dr. Ambedkar Chair Professor at NISWASS in Orissa, a Professor of Sociology at the University of Pune, as Asian Guest Professor at the Nordic Institute of Asian Studies, Copenhagen and as a Senior Fellow at the Nehru Memorial Museum and Library, New Delhi.  She has been a Visiting Professor and Coordinator, School of Social Justice, University of Pune and a Fellow at the Indian Institute of Advanced Study, Shimla.

Among her numerous books focusing on social and economic issues are Cultural Revolt in a Colonial Society: The NonBrahman Movement in Western India (reprint of 1976 book) (New Delhi, Manohar, 2011), Understanding Caste: From Buddha to Ambedkar and Beyond (New Delhi: Orient Blackswan, 2011), Seeking Begumpura: The Social Vision of Anti-caste Intellectuals, New Delhi, Navayana, 2009; Ambedkar: Towards an Enlightened India (Penguin, 2005), Buddhism in India: Challenging Brahmanism and Caste (SageIndia, 2003), Dalit Visions (Orient Longman, 1995), Dalits and the Democratic Revolution (Sage India, 1994), Reinventing Revolution: New Social Movements and the Socialist Tradition in India (M.E. Sharpe, 1993), Violence Against Women: New Theories and New Movements in India (Kali for Women, 1991), We Shall Smash this Prison: Indian Women in Struggle (Zed, 1980), and Cultural Revolt in a Colonial Society: The NonBrahman Movement in Maharashtra (Scientific Socialist Education Trust, 1966). Recently she has worked on translations from Marathi into English in collaboration with Bharat Patankar, including Vasant Moon’s Growing Up Untouchable in India: A Dalit Autobiography (Rowman and Littlefield, 2000).  She currently holds an ICSSR National Fellowship on the bhakti movement. With Bharat Patankar she has published Songs of Tukoba (translations).