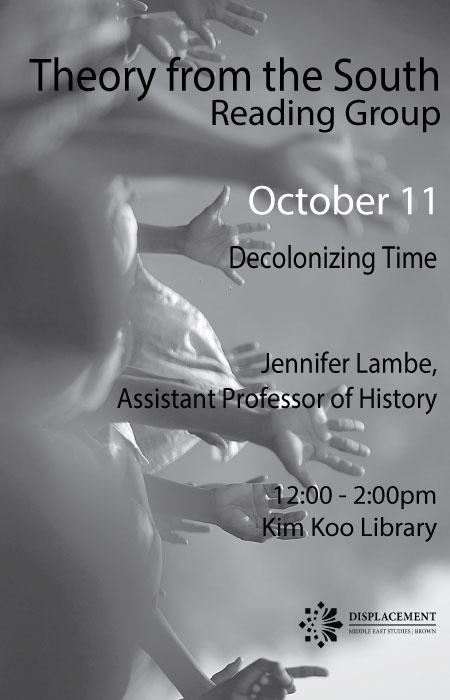 Theory from the South is a reading and discussion group, open to the public, that invites scholars from across campus that can "shake the ground" so to speak, to curate readings and lead conversations.

The “global South” is a working category today for a diversity of intellectual projects centered on the non-European postcolonial world.  Theory from the South locates the “south” as not merely a geographic category, but rather an epistemic one, as a generative source for theory and for understanding the world as it is changing around us.  This year's program is aligned to the MES Sawyer Seminar on Displacement and Modernity, but rather than focusing narrowly on “displacement,” it asks what conceptions of the “world,” the “global” in “global south,” are at work as we think mobility - crossing both territorial and disciplinary boundaries, or tracking people or ideas over time and space.

Jennifer Lambe is presently working on a book entitled Madhouse: Cuban History from the Margins, which traces the history of mental illness and mental healing in Cuba from the colonial period through 1980. Lambe's work, which has received support from the American Council of Learned Societies, the Andrew W. Mellon Foundation, the Coordinating Council for Women in History, and the Cuban Heritage Collection, explores the intersection between political history, intellectual history, and popular culture.

In Theory from the South with Jennifer Lambe, the readings she has selected are organized around the theme of Decolonizing Time, and includeexcerpts from Nicola Marie Chippen's Decolonizing Time: Work, Leisure, and Freedom (2014), as well as selections from Lefebvre, Helgesson, Adorno and Horkheimer, Lafargue, and Gorz. For readings, please contact Vazira Zamindar, Associate Professor of History, at vfyz@brown.edu.