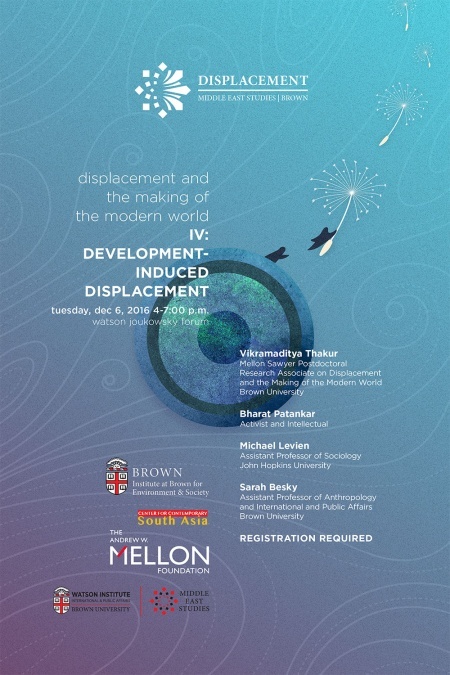 Registration on Eventbrite is open and is required.

Bharat Patankar is a leading activist of the left wing Shramik Mukti Dal and of the peasant movement in Maharashtra province, India. He is an activist intellectual who has worked for almost 40 years in movements of workers, farmers, dam evictees, agricultural labourers, the drought eradication movement,  alternative cultural movement, women’s liberation movement, anti-SEZ and coal-based power plant movement based on alternative energy  proposals, rights of farmers on windmills, and radical anti-caste movements. He is one of the architects of equitable water distribution movement in Maharashtra province. His numerous books and articles include 20 English articles and books, including “Characteristics of Contemporary Caste System and its Annihilation,” in Two Essays on Caste, (University of Mumbai).

Michael Levien is an Assistant Professor in the Department of Sociology at John Hopkins University.  His research and teaching interests fall in the fields of development sociology, political sociology, agrarian political economy, and social theory. He has had a long-standing intellectual and political engagement with the phenomenon of rural land dispossession for “development projects” such as dams and now Special Economic Zones (SEZs). His work can be found in The Land Question in India: State, Dispossession and Capitalist Transition (Oxford University Press) and Governing Global Land Deals: The Role of the State in the Rush for Land (Wiley-Blackwell).

Sarah Besky, discussant, is an Assistant Professor of Anthropology and International and Public Affairs at Brown University.  She is a cultural anthropologist with research interests in the environment, capitalism, and labor.  Her book, The Darjeeling Distinction: Labor and Justice on Fair-Trade Tea Plantations in India (University of California Press) explores how legacies of colonialism intersect with contemporary market reforms to reconfigure notions of value—of labor, of place, and of tea itself.

Co-sponsored by Middle East Studies, the Institute at Brown for Environment and Society, and the Center for Contemporary South Asia. This series is funded by a generous grant from the Andrew W. Mellon Foundation.