Saeed Naqvi ─ Being the Other: The Muslim in India 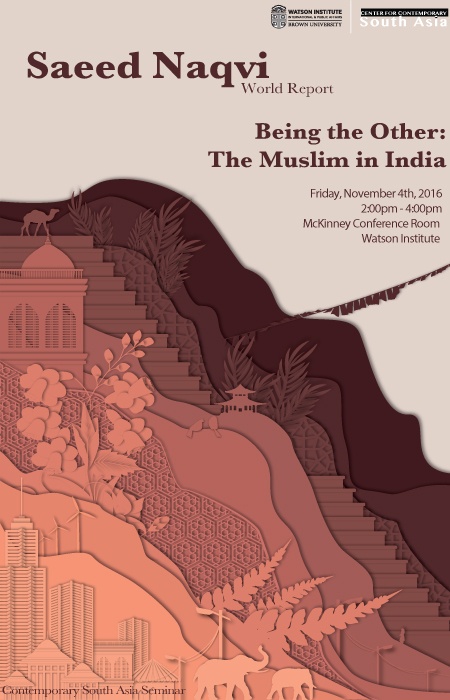 Saeed Naqvi is senior Indian journalist, television commentator, interviewer. He has interviewed world leaders and personalities in India and abroad, which appear in newspapers, magazines and on national television, remained editor of the World Report, a syndication service on foreign affairs, and has written for several publication, both global and Indian, including the BBC News, The Sunday Observer, The Sunday Times, The Guardian, Washington Post, The Indian Express, The Citizen and Outlook magazine. At the Indian Express, he started in 1977 as a Special Correspondent and eventually becoming, editor, Indian Express, Madras, (1979–1984), and Foreign Editor, The Indian Express, Delhi in 1984, and continues to writes columns and features for the paper.

Naqvi will share insights from his most recent book, Being the Other: The Muslim in India (Aleph Book Company 2016).  Partly a memoir and partly an exploration of the various deliberate and inadvertent acts that have contributed to the othering of the 180 million Muslims in India in Being the Other, Navqi looks at how the divisions between Muslims and Hindus began in the modern era. The British were the first to exploit these divisions between the communities in the nineteenth and twentieth centuries. In the run-up to Independence, and its immediate aftermath, some of India’s greatest leaders including Mahatma Gandhi, Jawaharlal Nehru, Vallabhbhai Patel, and others only served to drive the communities further apart.