Screening of What the Fields Remember with Director Subasri Krishnan 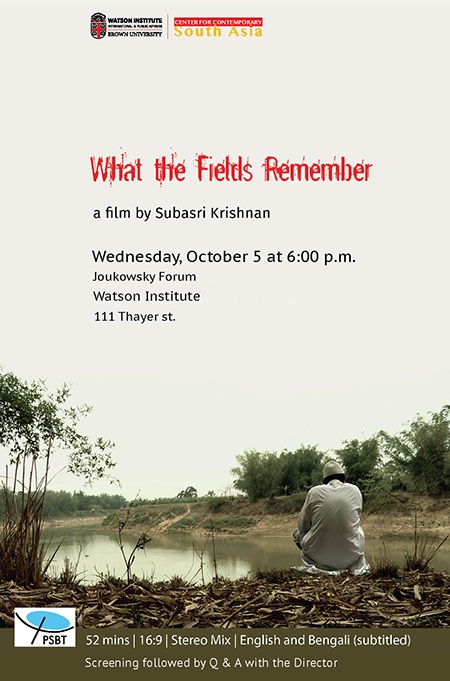 Film screening will be followed by Q & A with Dirctor, Subasri Krishnan

ABOUT THE FILM
Duration: 52 mins/HD/Bengali and English

On 18th February 1983, from 9:00 am to 3:00 pm, more than 2000 Muslims were killed in the town of Nellie and its surrounding villages in Assam, India. People’s homes were burnt down and their fields destroyed. Most of those who died were old people, women and children. Till date the Nellie massacre, remains on the margins of India’s public history, and is virtually wiped out from the nation’s collective memory.

The documentary film What the Fields Remember revisits the massacre three decades later. From the survivors, Sirajuddin Ahmed and Abdul Khayer’s, retelling of the event, and their struggles of coping with loss and memories that refuse to fade away, the film attempts to explore ideas of violence, memory and justice. It also tries to understand how physical spaces that have witnessed the violence continue to mark people’s relationship to history and memory. What the Fields Remember also attempts to raise larger questions around collective memory – of what we choose to remember and why we choose to forget.

Subasri Krishnan has been filmmaker for more than a decade. She also heads the Media Lab of the Indian Institute for Human Settlement (IIHS).