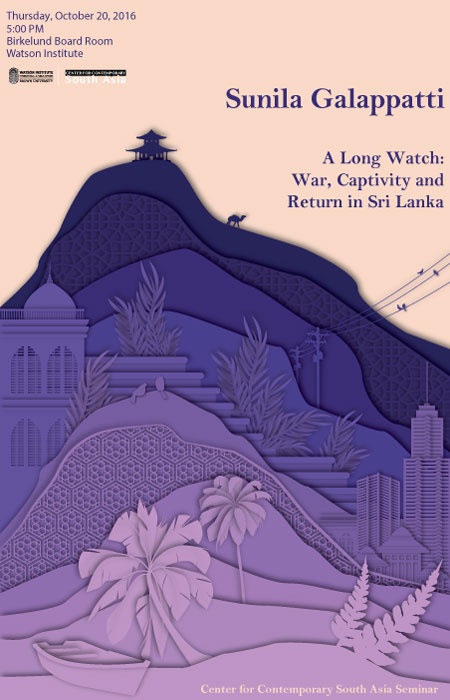 Sunila Galappatti has worked with other people to tell their stories, as a dramaturg, theatre director and editor. She started her working life at the Royal Shakespeare Company and Live Theatre, Newcastle and is a former Director of the Galle Literary Festival. She has recently been a Fulbright Visiting Fellow at Brown University; reflecting on processes carried out in different parts of the world to curate public histories. She lives in Sri Lanka.

A Long Watch offers a story of human complexity amid entrenched narratives of Sri Lanka’s long civil war. Pulled from a dark ocean after a battle at sea, Commodore Boyagoda became the highest-ranking prisoner detained by the Tamil Tigers. For eight years, he lived at close quarters with his declared enemy, his imprisonment punctuated by high-level talks about his fate, but also by extended conversations with his jailers and scratch games of badminton played in jungle clearings. Throughout, he observed his captors and fellow prisoners acutely, and with discreet empathy for the lives of others undone by war.

Sunila Galappatti describes a five year process of working with Commodore Ajith Boyagoda to re-tell, in a memoir, his experience of the Sri Lankan war.  Commenting on what is and is not included in the book, she reflects on simultaneous responsibilities in the process of bearing witness, raising small alarm about the form of the ‘well-told story’.

‘The best book yet on the war in Sri Lanka. It is subtle and intimate, human and generous. The author has distilled conversations about that period into a remarkable book. It is brilliant.’ — Michael Ondaatje, author of The English Patient

‘A moving testimonial to the depth and strangeness of human attachment. It recounts the other, greater destruction that war brings to society — the destruction of optimism, tolerance and social fibre.’ — Rana Dasgupta, author of Capital: A Portrait of Twenty-First Century Delhi

‘A fascinating, moving memoir, narrated with stark honesty and elegance of thought. Commadore Boyagoda and Sunila Galappatti illuminate, to great effect, a small, dim corner of a long, heated war. A Long Watch is storytelling at its very finest.’ — Samanth Subramanian, author of This Divided Island: Stories from the Sri Lankan War

‘An engaging book on one of the bloodiest civil conflicts in South Asia. Engaging not only for its thrilling description about war, captivity and freedom, but also for its moral courage in imagining the possible future of a reconciled republic.’ — The Hindu

‘Clear, vivid, and elegant, without a trace of either false heroics or self-pity.’ — Michael Frayn