Adnan Naseemullah — The Colonial Construction of Political Orders: Uneven State-Building and its Consequences in South Asia 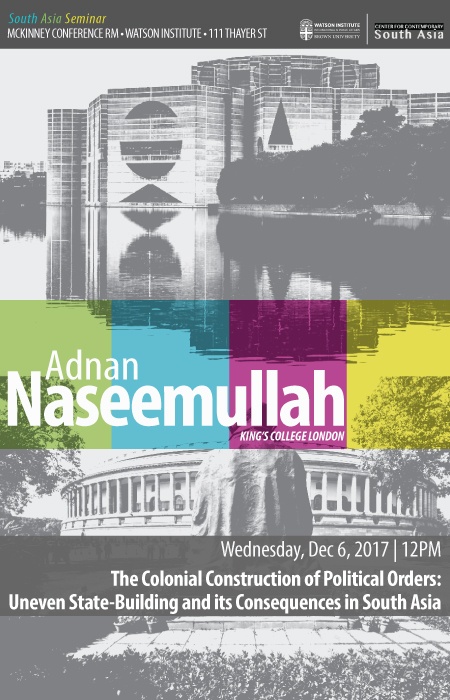 Lunch will be provided

Adnan A. Naseemullah is a Lecturer in International Relations at the Department of War Studies and the India Institute, King's College London, and the author of Development After Statism: Industrial Firms and the Political Economy of South Asia(Cambridge University Press, 2017). His research on comparative industrial development, state capacity, political violence, and electoral representation has appeared in Comparative Politics, Political Geography, Governance, Studies in Comparative International Development, Studies in Indian Politics, and India Review. Before King's, he held academic appointments at the London School of Economics and the Johns Hopkins University; he received a BA in political science and economics from Swarthmore College and a Ph.D. in political science from the University of California, Berkeley.

About the Lecture:
The legacies of British imperial rule in South Asia have received renewed scrutiny, yet the causal linkages between the nature of colonial governance and contemporary political outcomes remain underdeveloped. Naseemullah will argue that the long-term effects of colonial rule was that of uneven state formation in the nineteenth century. He will present theoretical and empirical work from his current book project on the causes of such unevenness before independence, and how it was reproduced in the postcolonial states of India, Pakistan, and Bangladesh. He will also demonstrate how uneven state-building has had enduring legacies in varieties of state-society relations in the contemporary South Asia, helping us understand aberrant outcomes in areas as diverse as structures of representation and patterns of political violence.