The Disappearance of Things / The City as Archive 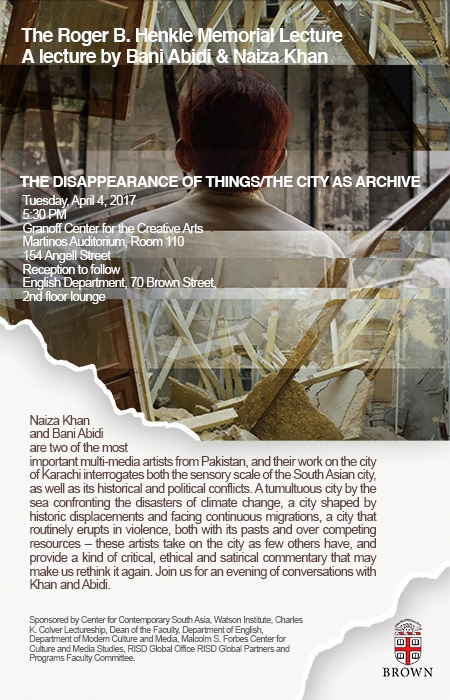 The Roger B. Henkle Memorial Lecture

Naiza Khan and Bani Abidi are two of the most important multi-media artists from Pakistan, and their work on the city of Karachi interrogates both the sensory scale of the South Asian city, as well as its historical and political conflicts. A tumultuous city by the sea confronting the disasters of climate change, a city shaped by historic displacements and facing continuous migrations, a city that routinely erupts in violence, both with its pasts and over competing resources – these artists take on the city as few others have, and provide a kind of critical, ethical and satirical commentary that may make us rethink it again. Join us for an evening of conversations with Khan and Abidi.

Naiza Khan, taught for many years at the Indus School of Art and Architecture in Karachi, continues to serve on the board of the Dept of Visual Studies at the University of Karachi, and is the founder of the Vasl Artists’ Collective, a vital organisation that supports artists through residencies, workshops and collaborations in a regional network. In 2013 she was awarded the Prince Claus Fund Prize, and her work has been shown in numerous local and internationals exhibitions including in Art Basel Hong Kong and at the Kochi-Muziris Biennale 2016, in the 2012 Shanghai Biennale and exhibitions such as Hanging Fire: Contemporary Art from Pakistan at the Asia Society, New York; XV Biennale Donna, Ferrara, Italy; Art Dubai 2008, Manifesta 8, Murcia, Spain; and the 2010 Cairo Biennale. Her work has also been written about extensively, including in scholarly journals and books, and writings concerning the city. Read a New York Times review of Khan's The Rising Tide exhibition at Mohatta Palace Museum or view the slideshow.

Bani Abidi was one of the early artists to begin working with video and performance, producing iconic works like Mangoes (1999), Shan Pipe Band Learns the Star Spangled Banner (2003) and The Ghost of Mohammad Bin Qasim (2006). She received her BFA from the National College of Arts in Lahore, Pakistan and an MFA from the School of the Art Institute of Chicago, and after years of moving between Karachi and Delhi, she now presently divides her time between Karachi and Berlin. Her work has been the subject of numerous one-person exhibitions, as well as group exhibitions including: Lines of Control: Partition as a Productive Space at the Nasher Art Museum, Duke University; No Country: Contemporary Art from South and Southeast Asia, at the Guggenheim Museum, New York, and the Scenes for a New Heritage: Contemporary Art from the Collection, MoMA, New York, among many others. Here is a Granta interview with Abidi.

On April 5th, join the 2017 RISD Global Forum with Bani Abidi. The talk will take place at RISD's Metcalf Auditorium/Chace Center located in the lobby of the RISD Museum starting at 6:45PM. Prior to the forum, guests are welcome to join Abidi for a reception in the Chace Lobby starting at 6:00PM.