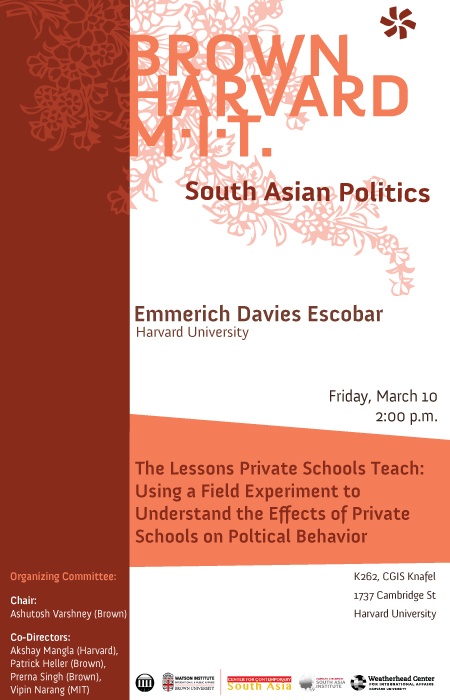 Emmerich Davies Escobar is an Assistant Professor of Education at Harvard University.

Emmerich Davies specializes in education policy and politics, the political economy of development, and the politics of service provision, with a regional focus on South Asia. His dissertation, for which he was awarded the National Academy of Education/Spencer Dissertation Fellowship, examines the growth of private elementary education in India and the consequences of using private rather than public schools on individuals' beliefs and civic engagement. Davies earned his B.A. in Economics and Political Science with honors from Stanford University in 2007, worked for two years for the Abdul Latif Jameel Poverty Action Lab in Kolkata, India, and Ph.D. in Political Science from the University of Pennsylvania.

Commentator: Bryce Millett Steinberg, a Postdoctoral Fellow in International and Public Affairs and received her PhD in economics from Harvard in 2015, and her AB from Brown in 2009.