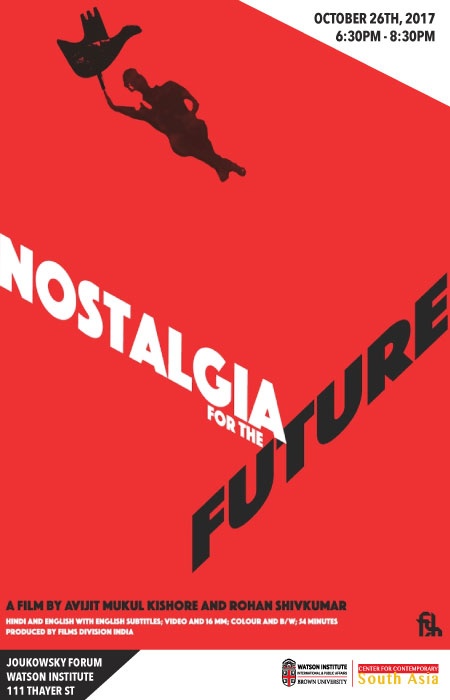 ‘Nostalgia for the Future’ is a film on Indian modernity, the making of the citizen and the architecture of the home. It looks at imaginations of homes across four examples of buildings made over the period of a century. These are Lukhshmi Vilas Palace in Baroda – the gigantic home built by a progressive monarch in the late 19th Century; Villa Shodhan in Ahmedabad – a private residence which represents the idea of domesticity within Nehruvian modernity, designed by Le Corbusier; Sabarmati Ashram in Ahmedabad, which epitomises the Gandhian aspirations of the nation-state; and public housing in post-independence Delhi, designed by the Government of India to house refugees from Pakistan and the bureaucrats of the newly independent nation.

The film explores these spaces and imagines the bodies that were meant to inhabit them through the evocation of the cinematic and aural collective memory of a nation. It uses a mix of formats – 16mm film and digital video in both colour and black and white, along with archival footage from state propaganda films and mainstream cinema.

The film is a collaboration between film maker Avijit Mukul Kishore and architect Rohan Shivkumar. It emerges from the intersection of their respective disciplines – architecture and documentary film, both of which have been ingrained in the discourse of utilitarianism and certainty. The film opens these disciplines out to self-critique and looks at their role in imagining and constructing a nation and its citizen.