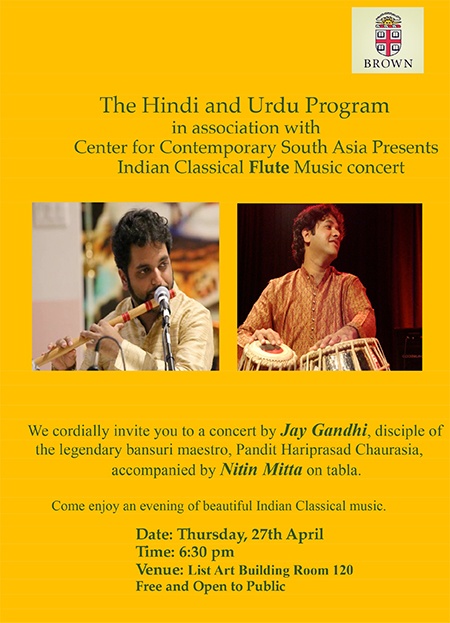 Jay Gandhi was shaped by years of intensive training under the legendary bansuri maestro, Pandit Hariprasad Chaurasia, Jay's music is at once reflective of his devotion to his Guru and a diverse range of musical influences. A recipient of the prestigious AIIS Performing Arts Fellowship, Jay maintains a busy schedule based mainly out of New York City, where he is very active as a teacher, performer and as a founding member of Brooklyn Raga Massive, a prominent Indian Classical musicians collective.

Nitin Mitta is one of the most sought after tabla players of his generation. Apart from being a dynamic soloist, he is an accompanist who has performed with some India's most celebrated Hindustani classical musicians worldwide. He joined forces with 2010 Grammy Nominee Pianist Vijay Iyer and electric guitarist R. Prasanna to produce a studio album titled Tirtha that blends elements of contemporary jazz with the North and South Indian traditional ragas.

Co-sponsored by the Hindi and Urdu Program