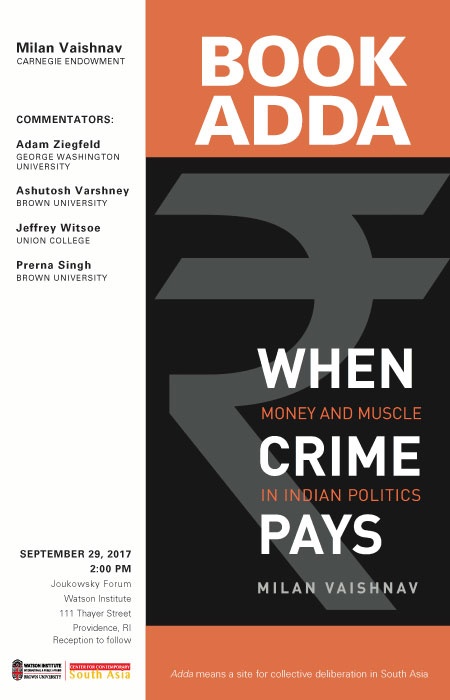 About the book: In India, the world’s largest democracy, the symbiotic relationship between crime and politics raises complex questions. For instance, how can free and fair democratic processes exist alongside rampant criminality? Why do political parties recruit candidates with reputations for wrongdoing? Why are one-third of state and national legislators elected—and often re-elected—in spite of criminal charges pending against them? In this eye-opening study, political scientist Milan Vaishnav mines a rich array of sources, including fieldwork on political campaigns and interviews with candidates, party workers, and voters, large surveys, and an original database on politicians’ backgrounds to offer the first comprehensive study of an issue that has implications for the study of democracy both within and beyond India’s borders. Order a copy.

Milan Vaishnav is a senior fellow in the South Asia Program at the Carnegie Endowment for International Peace in Washington, D.C. His primary research focus is the political economy of India. He has have previously worked at the Center for Strategic and International Studies, the Council on Foreign Relations, and the Center for Global Development. Vaishnav has also taught at Columbia, Georgetown, and George Washington Universities. He received a Ph.D. in Political Science from Columbia University. You can follow him on Twitter @MilanV.