Nusrat Chowdhury – The Body of the Crowd 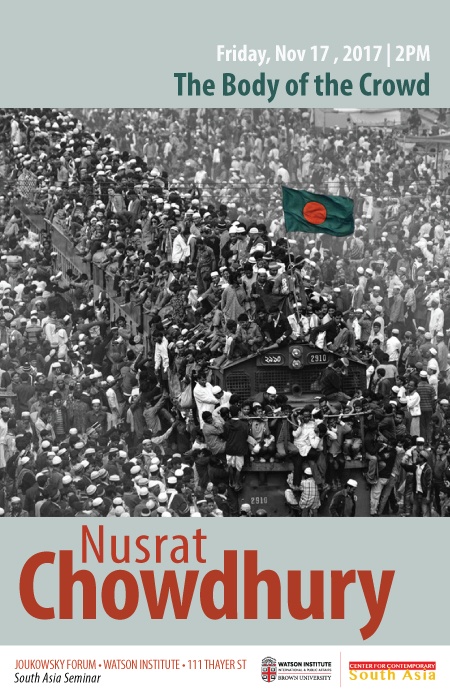 The presented paper takes crowd politics as symptomatic rather than representative of the ambivalences of mass democracy.  Its primary sites are the physical and virtual spaces of politics in Bangladesh that are at once emergent and historically poignant. At one level, it explores a particular fascination with the body – of the collaborator, the blogger and the militant – and its relationship to crowd politics under democratic rule. At another level, it sheds light on the proliferation of digital technologies that has deeply impacted social and political communication. The metaphor of contagion in the expression "viral" is also emblematic of crowds, or at least, the way it has long been discussed in social theory. The first section analyzes the politics of the body that characterized the movement against the International Crimes Tribunal in 2013, where the body of the collaborator was the target of the anger of a die-hard secular crowd whose own collective comportment was self-consciously different from most political gatherings in Bangladesh. The visual material in the second half brings to the fore the links between crowd behavior and mechanisms of surveillance and sociality, like close-circuit television and cellular phone camera. Chowdhury ultimately argues that while secular and religious crowds perform a competitive mimesis, social media activism, and surveillance technology more broadly, mimics the kind of crowd mentality it incriminates, and in so doing, reproduces certain immanence associated with crowds.

Nusrat Chowdhury received her PhD in Anthropology from the University of Chicago, MA from University of Texas at Austin, and BA from University of Michigan, Ann Arbor. She teaches courses on the anthropology of natural wealth, cultures of money, modernity and media in South Asia, Subaltern Studies, and affect in late capitalism. Her scholarly interests include crowds and protest, postcolonial democracies, resource politics, political communication, digital media, and South Asian Islam. Her regional expertise is in Muslim South Asia, specifically, Bangladesh.

Chowdhury's book, Paradoxes of the Popular: An Ethnography of Bangladeshi Democracy is an analysis of the reconfigurations within contemporary protest politics in South Asia. The premise of its inquiry is that the crowd is the primary bearer of political messages in the global south. Based on anthropological research on multiple mobilizations in rural and urban Bangladesh, it argues that resource and democracy have become two exemplary sites of anticipatory politics in the global south. The opposition to the Phulbari coalmines that exploded in 2006, the popular challenges to a state of emergency declared in early 2007, the movement against the War Crimes Tribunal in 2013, and the more recent digital activism around sexual harassment and vigilante violence in 2015 are some of its ethnographic sites.