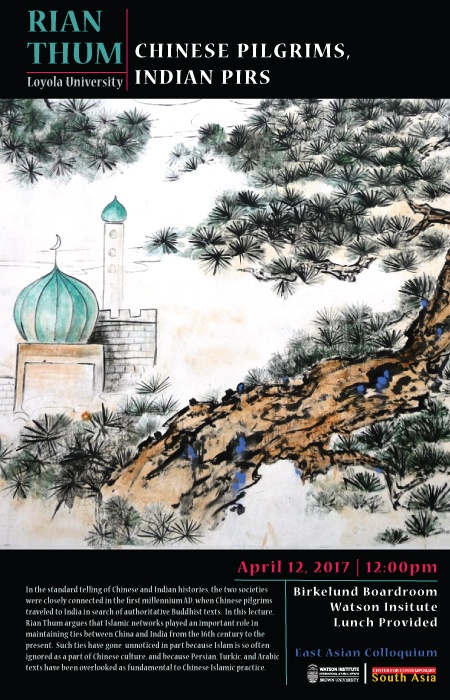 Rian Thum’s research and teaching are generally concerned with the overlap of China and the Muslim World. His book,  The Sacred Routes of Uyghur History (Harvard University Press, 2014) argues that the Uyghurs - and their place in China today - can only be understood in the light of longstanding traditions of local pilgrimage and manuscript culture.  The study uses manuscripts in Chaghatay and Persian, contemporary Uyghur novels, graffiti, and ethnographic fieldwork to uncover a complex of historical practices that offer new perspectives on what history is and how it works.

In the standard telling of Chinese and Indian histories, the two societies were closely connected in the first millennium AD, when Chinese pilgrims traveled to India in search of authoritative Buddhist texts. But this connection, which fundamentally reoriented Chinese culture, is supposed to have withered in the centuries after the first millennium, presumably because of Muslim conquests of the Tarim Basin and the Punjab. Indeed the story of Chinese-Indian connection disappears almost entirely from general histories until the 20th century. In this lecture, Rian Thum argues instead that Islamic networks played an important role in maintaining ties between China and India from the 16th century to the present. Such ties have gone unnoticed in part because Islam is so often ignored as a part of Chinese culture. More importantly, the study of Chinese Islam itself has been distorted by an overwhelming focus on Chinese-language texts. The surprising reemergence of Sino-Indian connection via Islamic networks demonstrates the potential for a history of Islamic China that gives due attention to the numerous cosmopolitan Persian, Turkic, and Arabic texts that have been fundamental to Chinese Islamic practice.