Alana Hunt — Cups of nun chai: a reading and discussion about Kashmir through an award-winning participatory art work and media intervention 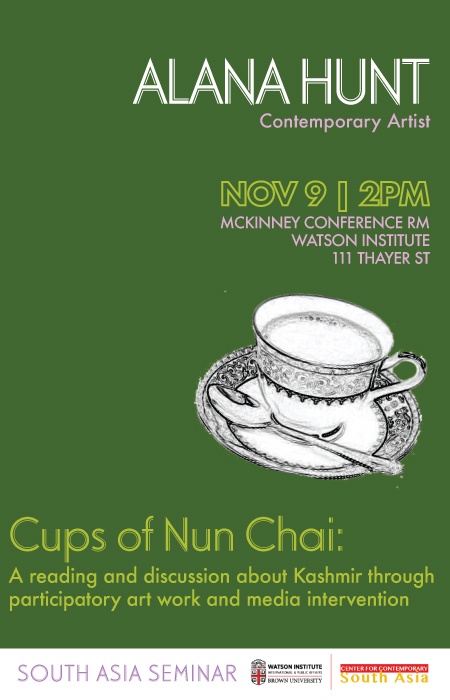 Through personal conversation and public media intervention Cups of nun chai explores some of the most challenging areas of contemporary life including the failures of democracy, state violence, armed struggle, the inherent fragility of the nation state, and the power of the media.

Over the summer of 2010 in Kashmir over 118 people died in protests against the Indian state. Between 2010-2012 Alana shared 118 cups of nun chai with 118 people as a means of memorialising this loss of life. She wrote from memory about each conversation and photographed each cup of tea. From June 2016 to April 2017 Cups of nun chai circulated three times a week in the newspaper Kashmir Reader, reaching audiences in Kashmir and placing the memory of 2010 in conversation with the news of the day. Cups of nun chai embodies the literal collision of memory and news, of subjectivity and event, of absurdity and urgency, and of fury and sensitivity.

Alana Hunt lives on Miriwoong country in the north-west of Australia. She makes contemporary art, writes, and produces culture through a variety of media across public, gallery and online spaces. Her work is grounded in the capacity of art and ideas to shape the social space between people and the public sphere. The politics of nation making and the colonial past and present of Australia and South Asia run in quiet yet consistent ways throughout her practice. Her work distills complex and controversial issues into personal encounters that are challenging and poetic, at once absurd and meaningful.

Since 2009 Alana has orchestrated participatory art and publishing projects that have activated different media forms in the public sphere to shed light on the charged narratives of Kashmir. Paper txt msgs from Kashmir (2009-2011) is a tactical media intervention that responded to a state wide ban on pre-paid mobile phones in Jammu and Kashmir. This work prompted media in India & Pakistan to speak about issues they had previously been silent on and won the Fauvette Laureiro Artists Scholarship (2011). The participatory memorial Cups of nun chai (2010-2017) emerged from the summer of 2010 when over 118 people died in pro-freedom protests and unfolded over two years of tea, conversation and blogging. From mid-2016 Cups of nun chai circulated as an eleven-month newspaper serial in Kashmir reaching tens of thousands of people on a weekly basis during a period of civilian uprising & state oppression. This work won the 2017 Incinerator Art Award, was nominated for an Infinity Award with the International Centre for Photography, and highly commended in The Blake Prize. Alana’s essay, A mere drop in the sea of what is, published by 4A Papers, explored the art circulating on the ‘streets of social media’ in Kashmir, excerpts of which made it into the Hansard Report of the Australian Parliament.