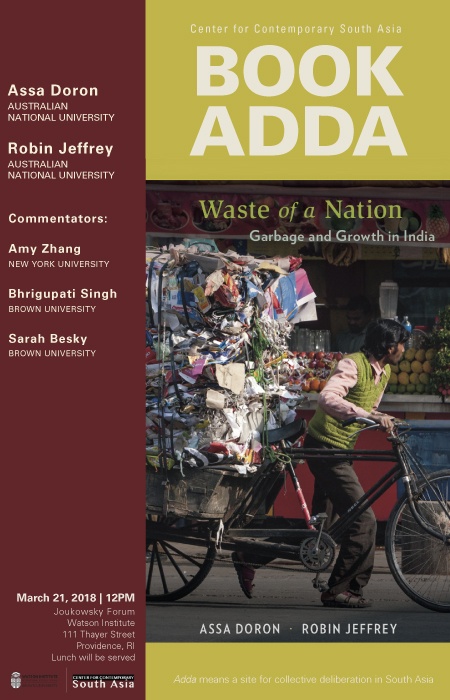 About the book: In India, you can still find the kabaadiwala, the rag-and-bone man. He wanders from house to house buying old newspapers, broken utensils, plastic bottles—anything for which he can get a little cash. This custom persists and recreates itself alongside the new economies and ecologies of consumer capitalism. Waste of a Nation offers an anthropological and historical account of India’s complex relationship with garbage.

Countries around the world struggle to achieve sustainable futures. Assa Doron and Robin Jeffrey argue that in India the removal of waste and efforts to reuse it also lay waste to the lives of human beings. At the bottom of the pyramid, people who work with waste are injured and stigmatized as they deal with sewage, toxic chemicals, and rotting garbage.

Terrifying events, such as atmospheric pollution and childhood stunting, that touch even the wealthy and powerful may lead to substantial changes in practices and attitudes toward sanitation. And innovative technology along with more effective local government may bring about limited improvements. But if a clean new India is to emerge as a model for other parts of the world, a “binding morality” that reaches beyond the current environmental crisis will be required. Empathy for marginalized underclasses—Dalits, poor Muslims, landless migrants—who live, almost invisibly, amid waste produced predominantly for the comfort of the better-off will be the critical element in India’s relationship with waste. Solutions will arise at the intersection of the traditional and the cutting edge, policy and practice, science and spirituality.