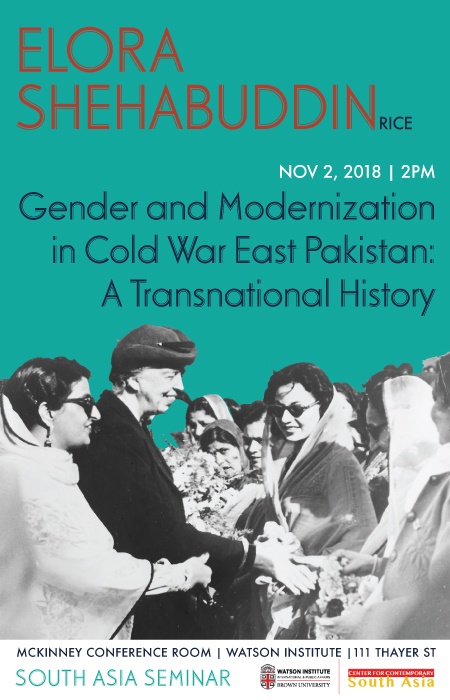 Elora Shehabuddin received her A.B. in social studies from Harvard University and PhD in politics from Princeton University. She was assistant professor of Women's Studies and Political Science at the University of California, Irvine, before moving to Rice in 2001.

Professor Shehabuddin is the author of two books, Reshaping the Holy: Democracy, Development, and Muslim Women in Bangladesh (Columbia University Press, 2008) and Enpowering Rural Women: The Impact of Grameen Bank in Bangladesh (Grameen Bank, 1992). She published articles in Modern Asian Studies, Signs: Journal of Women in Culture and Society, Journal of Women's History, Südasien-Chronik [South Asia Chronicle], Journal of Bangladesh Studies, and Asian Survey, as well as chapters in numerous edited volumes.  She is an associate editor of the Encyclopedia of Women and Islamic Cultures (Brill) and a guest co-editor of a special issue of Feminist Economics on "Gender and Economics in Muslim Communities." Her current book project is tentatively titled, "Visions of Progress: Feminism, Empire, and Muslim Women."

Professor Shehabuddin has received many fellowships, including the National Endowment for the Humanities, Woodrow Wilson Foundation, the American Association of University Women, the Social Science Research Council, the Andrew W. Mellon Foundation, and the U.S.. Institute of Peace. She has been selected as a research associate in the Women's Studies in Religion Program at the Divinity School at Harvard University and as a Carnegie Scholar.  Her doctoral dissertation was awarded the American Political Science Association's Aaron Wildavsky Dissertation Award for best dissertation in Religion an Politics.

Professor Shehabuddin's current project traces the history of successive generations of urban Muslim Bengali women activists over the second half of the twentieth century. This allows her to examine how they have negotiated their identities—as Bengali, Pakistani, Bangladeshi, Third World, secular, religious, and Muslim—at different moments and how transnational interactions and international interventions have shaped their priorities. This paper focuses on the early decades of the post-WW2 era, an era of decolonization, Cold War rivalries, and the hegemony of modernization ideology. Even before the rise of what came to be called second-wave feminism or any formal interest in women in development, western policymakers directed special attention to women’s issues and women’s groups in the Third World. Shehabuddin analyzes the often conflicting ideas of progress and development in play in this era that emerge across, for example, the reports of US foundations and universities on their programs in East Pakistan; Peace Corps newsletters; articles and letters from readers about international visitors and women’s rights in Bengali magazines such as Begum; and the personal memoirs and travelogues of Bengali women activists of that time