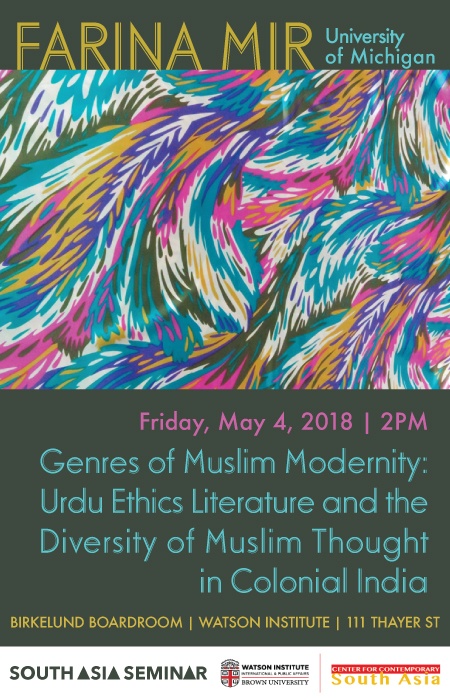 Farina Mir is a historian of colonial and postcolonial South Asia, with a particular interest in the social, cultural, and religious history of late-colonial north India. Her first book, The Social Space of Language: Vernacular Culture in British Colonial Punjab (Berkeley: University of California Press, 2010) is a study of the Punjabi language and its literature under colonialism (from 1849-1947), with a particular focus on qisse, or epic stories/romances. The book was awarded the 2011 John F. Richard Prize in South Asian History from the American Historical Association and the 2012 Bernard Cohn Prize from the Association of Asian Studies. Mir has published in Comparative Studies in Society and History and the Indian Economic and Social History Review, and has been the recipient of fellowships from the Social Science Research Council, the Ford Foundation, and the Whiting Foundation, among others. She has held a postdoctoral fellowship at the Society for the Humanities at Cornell University, and has taught at Cornell and the University of Virginia in addition to the University of Michigan.

Mir is currently working on two on projects. The first, tentatively titled "Producing Modern Muslims: Everyday Ethics in Late Colonial North India," is a study of Muslim socio-religious reform in late-colonial India, focusing on the role of popular ethics in constituting modern Muslim subjectivity and history. The second is "A History of Islam in South Asia," a synthetic history that covers the period from the rise of Islam to contemporary times.

Abstract:
In the late-nineteenth and early-twentieth centuries, a range of Urdu texts were published in India within the genre of Akhlaq (ethics). All were texts about ethics, but they varied immensely in both style and content. This talk examines Urdu akhlaq literature, with a focus on how this genre helps us elaborate a history of Muslim South Asia. While there is a robust body of work on Muslim history in South Asia, much of it has focused on elite figures, canonical texts, institutional formations—religious and political. Urdu akhlaq literature provides an opportunity to consider more popular forms of religious and social discourse and their impact on our understanding of Muslim and South Asian history.