International Symposium — How Secular is Art? On the Art of Art History in South Asia 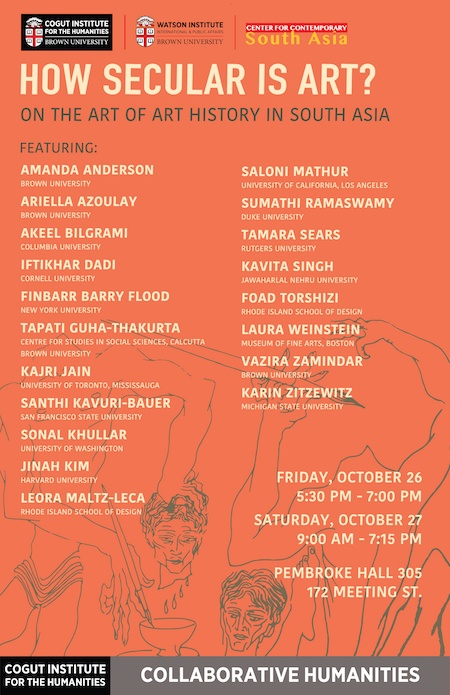 Through the evolving discipline of art history and its institutional apparatus in South Asia, there was an elaborate distilling of a ‘secular’ field, in which both the art of the ancient and medieval past as well as of the modern nation came to be positioned. The modern epistemology of ‘art’ could accommodate as effectively the religious productions and iconographies of the nation’s past as the repertoire of divine and mythological imagery in the art of the present. If ‘Indian’ art traditions came to be invested with a uniquely ‘spiritual’ character, the ‘spiritual’ could be seen as a markedly secular designation: one that would give the religious objects of the past a new sacral stature of ‘art’.

Yet, the distinction between the ‘secular’ and ‘religious’ has always been a fraught one. Even as the categories of the ‘Indic’ and the ‘Islamic’ came to be fundamentally shaped by art history, they also became contesting grounds in the forging of a national inheritance. The partition of the subcontinent on a religious basis intensified the claims of religious difference and incommensurability. In recent times, the ‘secular’ habitus for art in contemporary South Asia appears more threatened than ever before, amidst surging claims of the ‘religious’ and of ‘religious difference’. In this context, how should we comprehend the shifting field of art objects and their histories? Do we look upon these shifts as the inadequate formations of the ‘secular’ or the restoration of the fundamentally ‘religious’ content of art?

The symposium positions itself at the cusp of two dominant discourses in the field of South Asian art history – (i) one, a lingering trend of Orientalist and nationalist projections that emphasise the quintessentially ‘religious’ nature of South Asian artistic traditions as against the secularisation of art in the West (ii) the other, a counter assertion of the powerful place of art within the modern secular life of nations, that takes for granted the transitions of objects from earlier religious to new artistic denominations within the disciplinary folds of museums and art histories. One of the concerns of the symposium will be to question these temporal, spatial and cultural binaries between the ‘religious’ and the ‘secular’ and look at the current forms of interlocutions and interpellations of both these categories in contemporary scholarship as well as practice.

As an invitation to interrogate the secular temporality of art, how do we complicate the religious designations of the field of pre-modern art and architecture and its relationship to the nation-form? How does the inclusion of popular and contemporary art into the field of art history transform the religious claims of the past? What are the residues, returns and reinventions of the ‘religious’ in the contemporary that call out for engagement? How do we reconceptualize the public and the political - as fiery contestations and new curatorial practices reconfigure the meaning of objects through the proliferating mediated spaces of museums, galleries, biennales and the academy? How do we understand the South Asian discipline’s deep entanglements with the politics of the present? Do we have to fundamentally rethink the ‘art’ of ‘art history’ itself in order to understand and intervene in our turbulent present?

This symposium aligns with the Cogut Institute Collaborative Humanities graduate seminar of the same title (HMAN 2400H: Art History from the South: Circulations, Simulations, Transfigurations), as well as the lecture series, Art History From the South.

Co-Sponsored with the Cogut Insititute for Humanities