Menaka Guruswamy - The Jurisprudence of Freedom: We the Peoples' Supreme Court 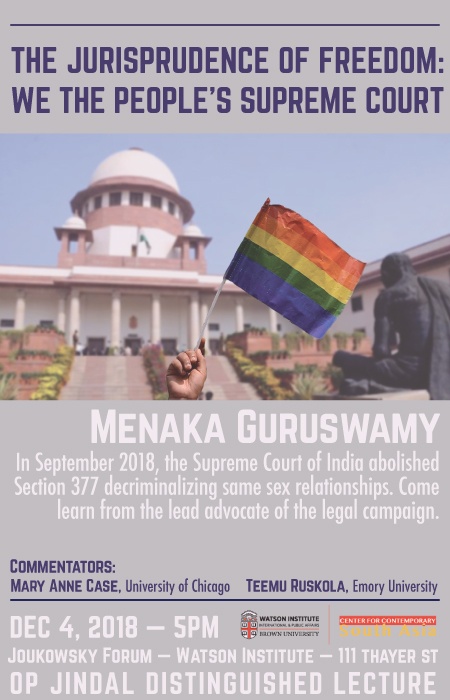 Dr. Menaka Guruswamy practices law before the Supreme Court of India. She is also is BR Ambedkar Research Scholar and Lecturer in Law at Columbia Law School.

In her litigation practice in India, she focusses on large constitutional rights claims, and has successfully brought reform of the bureaucracy in the country, defended federal legislation that mandates that all private schools admit disadvantaged children and is amicus curiae appointed by the Supreme Court in a case concerning 1528 alleged extra-judicial killings by the military and security personnel. Most recently, she represented petitioners who challenged and successfully overturned India's 158 year sodomy law in the landmark decision of Navtej Singh Jauhar v Union of India delivered on September 6, 2018.

Dr. Guruswamy read law as a Rhodes Scholar at Oxford University where she was awarded a Doctor of Philosophy in Law (D. Phil.) and as a Gammon fellow for a Masters in Law at Harvard Law School. She has been Visiting Faculty at Yale Law School, Columbia Law School and New York University School of Law. Dr Guruswamy is also presently distinguished faculty at University of Toronto Faculty of Law.  She was a fellow at the Wissenschaftskolleg zu Berlin/Institute of Advanced Studies, Berlin for 2016-2017.

Her most recent publications include essays on Constitution-Making in South Asia, in Handbook on Comparative Constitutional Law (Edward Elgar, Forthcoming (2018) and ‘Crafting Constitutional Values: An Essay on the Supreme Court of India’, (An Inquiry into the Existence Of Global Values, Hart Publishing/Bloomsbury: (2015). She has written widely for newspapers including the New York Times, the Indian Express and The Hindu and is currently working on a book on South Asian Constitutionalism.