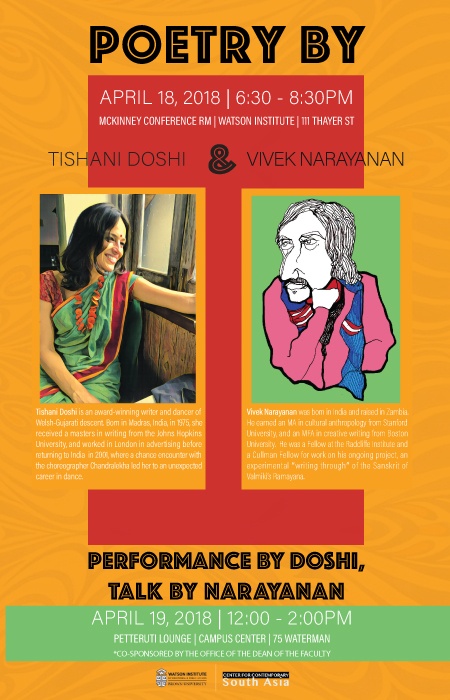 Tishani Doshi was born in the city formerly known as MADRAS in 1975. She has published six books of poetry and fiction. Her essays, poems and short stories have been widely anthologized.  In 2012 she represented India at a historic gathering of world poets for Poetry Parnassus at the Southbank Centre, London. She is also the recipient of an Eric Gregory Award for Poetry, winner of the All-India Poetry Competition, and her first book, COUNTRIES OF THE BODY, won the prestigious Forward Prize for Best First Collection in 2006. Tishani's debut novel, THE PLEASURE SEEKERS, was shortlisted for the Hindu Literary Prize and long-listed for the Orange Prize and the International IMPAC Dublin Literary Award.

Vivek Narayanan was born in India and raised in Zambia. He earned an MA in cultural anthropology from Stanford University, and an MFA in creative writing from Boston University.  He was a Fellow at the Radcliffe Institute, Harvard University (2013-14) and a Cullman Fellow at the New York Public Library (2015-16) while working on a book of poems about the ancient Indian epic poem Ramayana.

Narayanan has taught history, anthropology and creative writing in many places, including the University of Kwazulu-Natal in Durban, South Africa, and the Center for the Study of Developing Societies in New Delhi.  His books of poems include Universal Beach (Harbour Line Press, 2006/In Girum Books, 2011) and Life and Times of Mr S (HarperCollins India, 2012). A full-length collection of his poems in Swedish translation was published in 2015 by the Stockholm-based Wahlström & Widstrand. He is co-editor of Almost Island, a nine-year old India-based journal, literary organization, and publisher. His essays, criticism, and poetry have appeared in Agni, Granta, The Village Voice, Harvard Review, Caravan, and elsewhere, and his poems have been included in anthologies such as The Bloodaxe Book of Contemporary Indian Poets (Bloodaxe), The Oxford Poets Anthology 2013 (Carcanet), 60 Indian Poets (Penguin), and Language for a New Century (W.W. Norton).