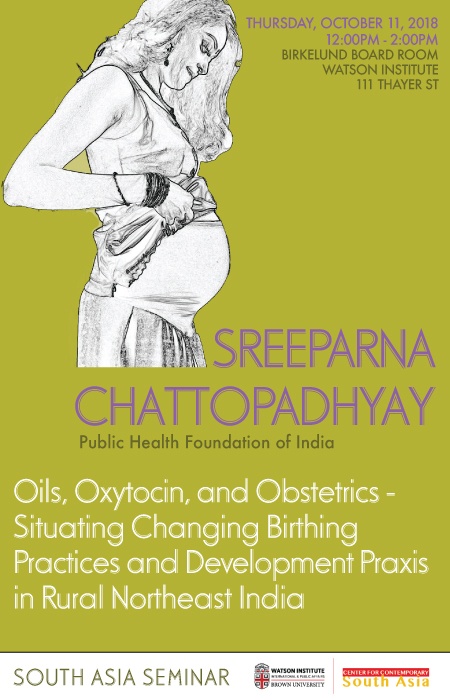 Lunch will be provided

Institutional births in India have increased from 39% in 2005-06 to 79% in 2014-15. In the state of Assam, in Northeast India where this study is located births in hospitals have increased from 22.4% in 2005-06 to 70.6%, of which over 60% are in state facilities. This paper draws from 17 months of fieldwork in rural Assam with 24 young women who gave birth in the last two years, as well as their families and an additional set of 8 life histories of older women who had homebirths, prior to the expansion of institutional deliveries in the hamlet. We focus on the shift from home to hospital-based births across three generations in a single hamlet and find the gradual unfolding of a complex and often, ambivalent narrative of change where births have moved from a cultural rite of passage to biomedicalised interventions-oriented obstetrics and obstetrician led births within thirty years. While maternal and infant mortality rates have declined significantly in the region, birthing experiences in institutions are often disrespectful, inhumane and violent. Women have articulated different registers for pain and suffering (kosto) wrought on by two different kinds of labour – the labour of childbirth and the labour of sustaining lives and livelihoods in the backdrop of diminishing access to arable land. We discover contradictory narratives that sometimes elides the suffering during protracted and multiple childbirths and the near-universal experience of loss of infants or children, normalising this experience, while emphasising the need for “safe” births in hospitals for their grand-daughters and daughter in-laws. The impact of the state push towards birth in facilities has been so totalising that women who “choose” to have home-births are stigmatised for not subscribing to the development agendas of the state. Childbirth practices thus become an allegory for situating changes in the larger political economy. This helps unravel the interactions between several binaries - the local and the global, tradition and modernity, the past and the present (and also the future) and, nature and technology. Changing birthing practices thus allow us an exploration of the transition between these categories, and more importantly the seepages between them that help identify the processes that allow for the recounting of a complex narrative of change.

Dr. Sreeparna Chattopadhyay is an Associate Professor and Senior Research Scientistat the Public Health Foundation of India. Sreeparna conducts research in the areas of Gender Studies, Health, Family/Kinship and Gender-Based Violence using anthropological methods and theory. Her most recent project explored factors affecting maternal health in Assam. She has also worked in applied research and uses mixed-methods in her research. Currently she is working on a study on marital sexual violence.

Co-sponsored by the Anthropology Department