Tapati Guha Thakurta — A Goddess, a Chief Minister and a City: Reflections on a Festival-Mode of Populist Politics in Contemporary India 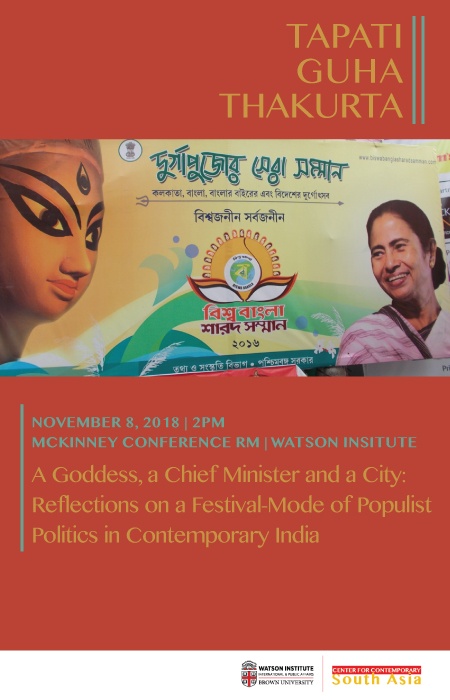 Through a micro-study of contemporary Kolkata, this paper wishes to probe the phenomenon that Guha-Thakurta is terming Bengal’s new ‘festival mode’ of populist politics, and look at how the city has been rendered into a space of permanent spectacle and spectactorship. Taking off from the point where she ended hrt book on the Durga Pujas of contemporary Kolkata, this study thinks about the ways in which the mega-festival of goddess Durga has not only generated a never-ending circuit of festivities in the city, but has also lent its template to each of these events, generating a form of urban spectacle that now pervades the city all through the year. It has seen the ruling party and the government, and most powerfully, the Chief Minister herself, taking up the lead role - through the primary agency of the local clubs - in the staging of this ceaseless spurt of festivals and the year-round proliferation of illuminations, architectural replicas, street décor and public art and statuary. This has resulted, Guha-Thakurta argues, in the dissolving of all boundaries between modes of festivities and modes of governance.  If the Durga Pujas serve as the meta-cultural trope for all that happens in the city of Kolkata, it is instructive to reflect on how the Pujas have now also now translated into an entire style of running the state, letting roll a never-ending spurt of state-sponsored festivals and beautification projects as a prime medium of populist politics.

Tapati Guha Thakurta is Professor of History at the Centre for Studies in Social Sciences, Calcutta. Her work is located within the disciplinary fields of cultural history, history of art and visual studies. She has written widely and taught courses on the following themes: art, nationalism and modernity; the institutional practices and political locations of art history and archaeology; the careers of monuments and museum objects; and popular urban visual culture of modern and contemporary India. Her three main books are The Making of a New 'Indian' Art: Artists, Aesthetics and Nationalism in Bengal (Cambridge University Press, 1992), Monuments, Objects, Histories: Institutions of Art in Colonial and Postcolonial India (Columbia University Press, and Permanent Black, 2004), and In the Name of the Goddess: The Durga Pujas of Contemporary Kolkata (Delhi: Primus Books, 2015). She has also authored exhibition monographs and has co-edited two anthologies of essays – Theorising the Present: Essays for Partha Chatterjee (Delhi: OUP, 2011) and New Cultural Histories of India: Materiality and Practices (Delhi: OUP, 2013).