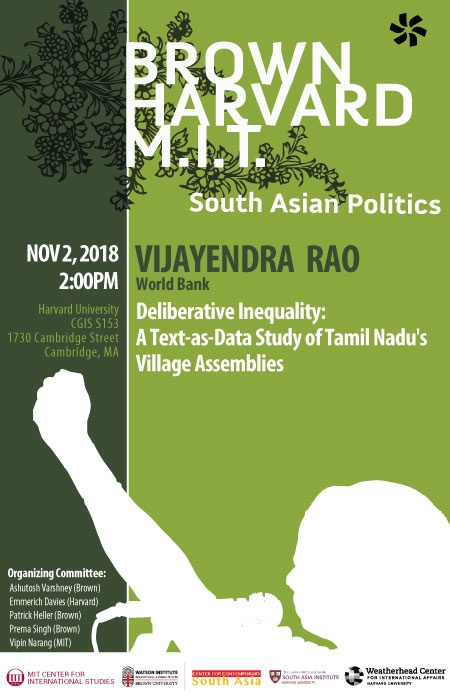 Vijayendra Rao is a Lead Economist in the Development Research Group of the World Bank. He integrates his training in economics with theories and methods from anthropology, sociology and political science to study the social, cultural, and political context of extreme poverty in developing countries. Dr. Rao has published on a variety of subjects that include dowries and domestic violence in India, the economics of celebrations, sex work in Calcutta, participatory development, village democracy and deliberation, and inter-disciplinary approaches to public policy. He co-edited Culture and Public Action, and History, Historians and Development Policy, and co-authored the 2006 World Development Report on Equity and Development. Most recently, with Ghazala Mansuri, he co-authored the World Bank's Policy Research Report on Localizing Development: Does Participation Work?

Dr. Rao obtained a BA (Economics, Statistics, Sociology) from St. Xavier's College - Bombay (now Mumbai), a PhD from the University of Pennsylvania, was a post-doctoral fellow at the Economics Research Center and an Associate of the Committee on Southern Asian Studies at the University of Chicago, and taught at the University of Michigan and Williams College before joining the World Bank's Research Department in 1999. He serves on the editorial boards of several journals, and is a member of the Successful Societies Program at the Canadian Institute for Advanced Research (CIFAR), and affiliated with research institutes and NGOs in India, the US, and the UK.

Abstract:
The resurgence of deliberative institutions in the developing world has prompted a renewed interest in the dynamics of citizen engagement. Using text-as-data methods on an original corpus of village assembly transcripts from rural Tamil Nadu, India, this paper opens the "black box" of deliberation to examine the gendered and status-based patterns of influence. Drawing on normative theories of deliberation, this analysis identifies a set of clear empirical standards for “good” deliberation, based on an individual's ability both to speak and be heard, and uses natural language processing methods to generate these measures. The study first shows that these assemblies are not mere "talking shop" for state officials to bluster and read banal announcements, but rather, provide opportunities for citizens to challenge their elected officials, demand transparency, and provide information about authentic local development needs. Second, the study finds that across multiple measures of deliberative influence, women are at a disadvantage relative to men; women are less likely to speak, set the agenda, and receive a relevant response from state officials. Finally, the paper shows that although quotas for women on village councils have little impact on the likelihood that they speak, they do improve the likelihood that female citizens are heard. Read the full paper here.