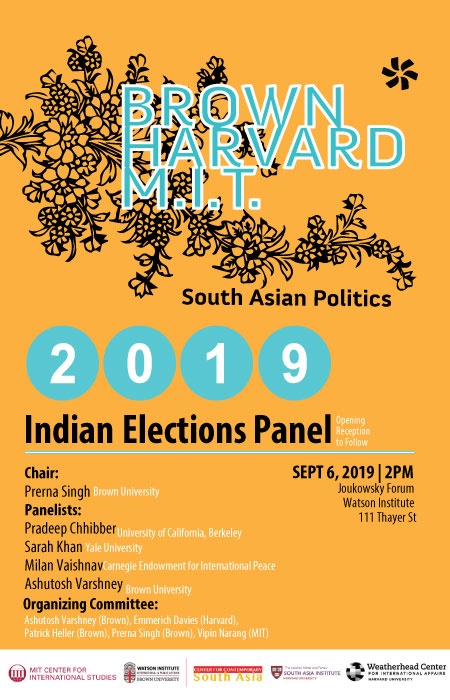 India’s 17th national elections, which recorded the highest turnout since independence, returned Narendra Modi and the BJP to power with an enhanced majority. What are the implications? The panelists debate.

Pradeep Chhibber is a Professor and Indo-American Chair in Indian Studies at the Institute for South Asia Studies at the University of California, Berkeley. He studies party systems, party aggregation, and the politics of India. His research examines the relationship between social divisions and party competition and conditions that lead to the emergence of national or regional parties in a nation-state.

Sarah Khan is Lecturer of Political Science at Yale. She researches gender and comparative politics, with a regional specialization in South Asia. In her work, she studies gender gaps in political preferences, and the barriers to women’s political participation and representation.

Prerna Singh is Mahatma Gandhi Associate Professor of Political Science and International Studies at Brown University. Singh’s research focuses on the improvement of human well-being, particularly as it relates to the promotion of social welfare on the one hand, and to the mitigation of ethnic conflict and competition, on the other.

Milan Vaishnav is a senior fellow in the South Asia Program at the Carnegie Endowment for International Peace in Washington, D.C. His primary research focus is the political economy of India.