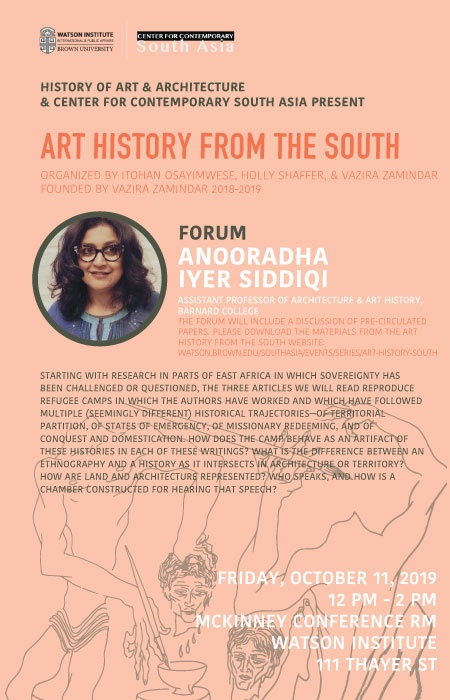 Anooradha Iyer Siddiqi specializes in histories of architecture, modernity, and migration in the nineteenth and twentieth centuries. Her work examines problems of historicity and archives, heritage politics, and feminist and decolonial practices, with focus on African and South Asian questions stemming from diverse forms of aesthetic and cultural production. Her scholarship attempts to expand histories of marginalized people and figures, and promote practices of collaboration and support, especially to foreground the lives and narratives of communities that have been systematically excluded or silenced.

Professor Siddiqi's book manuscript Architecture of Migration: The Dadaab Refugee Camps and Humanitarian Settlement analyzes the history, visual rhetoric, and spatial politics of the Dadaab refugee camps in Northeastern Kenya. Drawing from many years of historical, ethnographic, and visual research in East Africa, South Asia, and Europe, it attempts to move beyond ahistorical representations of camps and their inhabitants, finding long migratory and colonial traditions in the architecture, spatial practices, material culture, and iconography of refugees and humanitarians. She is also developing a book manuscript titled Minnette de Silva and a Modern Architecture of the Past, which engages the intellectual and heritage work of one of the first women to establish a professional architectural practice, an important cultural figure in the history of Ceylon/Sri Lanka. These two projects inform Professor Siddiqi's wider body of research on histories of architecture, craft, settlement, and land, experiences of migration and territorial partition, and constructions of the past through architectural practice, pedagogy, and discourse on the African continent and Indian subcontinent. Her writings appear in The Journal of the Society of Architectural Historians, The Journal of Architecture, Humanity, Architectural Theory Review, Grey Room, Perspecta, e-flux Architecture, The Funambulist, Harvard Design Magazine, The Avery Review and the volumes Spatial Violence (Routledge) and Things Don't Really Exist Until You Give Them A Name: Unpacking Urban Heritage (Mkuki na Nyota).

Professor Siddiqi holds a Ph.D. in the History of Art and Archaeology, and a Master of Architecture degree and professional license. She has been awarded fellowships or grants by the Harvard University Mahindra Humanities Center, the New York University Provost and Gallatin School, the Fulbright Scholar Program, the Social Science Research Council, the American Institute of Indian Studies, and the Graham Foundation. She practiced architecture in Bangalore, Philadelphia, and New York, and wrote The L!brary Book (Princeton Architectural Press), with support from the National Endowment for the Arts, on the New York City schools arts initiative led by the Robin Hood Foundation. Her professional background includes work for the United Nations Foundation, the Coalition for Adolescent Girls, and the Women’s Refugee Commission.

Anooradha Iyer Siddiqi, “Architecture Culture, Humanitarian Expertise: From the Tropics to Shelter, 1953-1983.” Journal of the Society of Architectural Historians.

Anooradha Iyer Siddiqi and Alishine Osman, “Traversals: In and Out of the Dadaab Refugee Camps.” In “Urban Divides,” Perspecta, edited by Megan McCallister and Mahdi Sabbagh.

Professor Siddiqi will also give a lecture at 5:30 pm in History of Art & Architecture’s “On Speculation” lecture series.