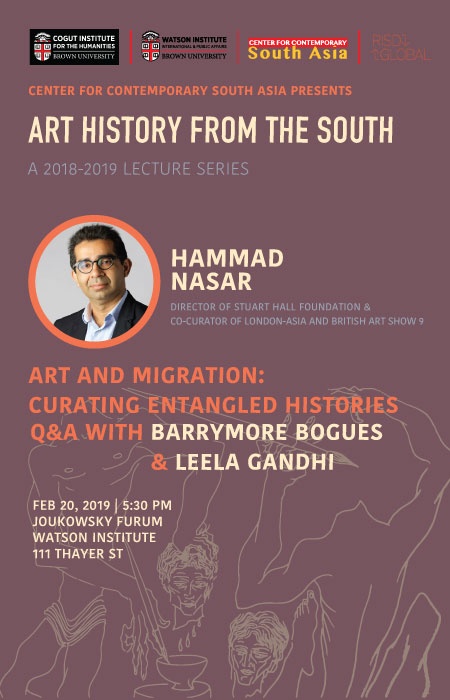 Hammad Nasar is a curator, writer and researcher based in London. He is Executive Director of the Stuart Hall Foundation and Senior Research Fellow at the Paul Mellon Centre for Studies in British Art. He co-founded the arts organisation Green Cardamom, London (2004–12), and was Head of Research & Programmes at Asia Art Archive, Hong Kong (2012–16). Known for collaborative, research-driven and exhibition-led inquiry, he has curated or co-curated numerous exhibitions internationally. His recent exhibition projects include:

Lines of Control: Partition as a Productive Space (2005–13); Excessive Enthusiasm: Ha Bik Chuen and the Archive as Practice (2015); Rock, Paper, Scissors: Positions in Play – the UAE’s national pavilion at the 57th Venice Biennale (2017); and Speech Acts: Reflection-Imagination-Repetition (2018–19). Nasar is a member of the Board of Mophradat (Belgium), and the Editorial Board of Tate’s magazine, Tate Etc. He has also served in juries, boards and advisory roles for numerous organisations internationally, including: the V&A Museum’s Jameel Prize 4 (UK); Art Basel’s crowdfunding partnership with Kickstarter (Switzerland); Iniva (Institute of International Visual Arts, UK); Delfina Foundation (UK); Alserkal Avenue (UAE), and the Lahore Biennial Foundation (Pakistan).

Barrymore Bogues is the Director of the Center for the Study of Slavery and Justice and of his many writings on the global history of political thought, he is the editor of After Man, Towards the Human: Critical Essays on Sylvia Wynter (2005); The George Lamming Reader: The Aesthetics of Decolonisation (2011) and Metamorphosis : The Art of Edoaurd Duval -Carrie (2017) and curator of numerous shows.

Leela Gandhi is the interim Director of the Center for Contemporary South Asia, and John Hawkes Professor of Humanities and English. She is a literary and cultural theorist whose research and teaching focus on transnational literatures, postcolonial theory and ethics, and the intellectual history of the nineteenth and twentieth centuries.

Co-sponsored by the Cogut Institute for the Humanities, History of Art & Architecture Department, & RISD Global