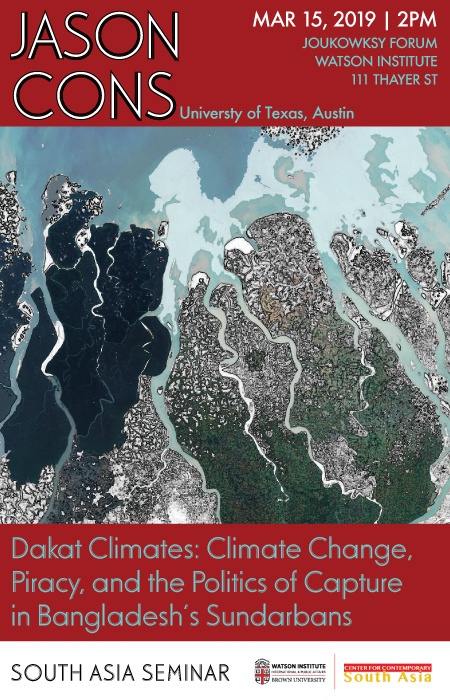 Jason Cons is an Assistant Professor of Anthropology at the University of Texas at Austin. He works on borders in South Asia, climate and agrarian change, and rural development. He has conducted extensive research in Bangladesh on a range of issues including: climate security, disputed territory along the India-Bangladesh border, the impacts of shrimp aquaculture in coastal areas, the politics of development, and recipient experiences with microcredit. His current research is situated in the Sundarbans region and explores the ways that imaginations of the impacts of future climate change are shaping the delta and the India-Bangladesh border in the present. His first book, Sensitive Space: Anxious Territory at the India-Bangladesh Border, was published by the University of Washington Press in 2016. His work has appeared in Cultural Anthropology, Political Geography, Modern Asian Studies, Ethnography, SAMAJ, Antipode, Third-World Quarterly, and The Journal of Peasant Studies. He is also an associate editor of the journal South Asia. He is the editor, with Michael Eilenberg, of a volume titled Frontier Assemblages: The Emergent Politics of Resource Frontiers in Asia for Wiley’s Antipode Book Series and is co-editing a special issue if Limn on “chokepoints.”

Cons has served as the Director of Research and Project Design at the Goldin Institute in Chicago. He was previously an Assistant Professor of International Relations at Bucknell University. Cons’s work has been supported by the National Science Foundation, the Social Science Research Council, Oxfam America, the Atkinson Center for Sustainability at Cornell University, the Judith Reppy Institute for Peace and Conflict Studies, and the American Institute of Bangladesh Studies. He completed his degree in Development Sociology at Cornell University in 2011.