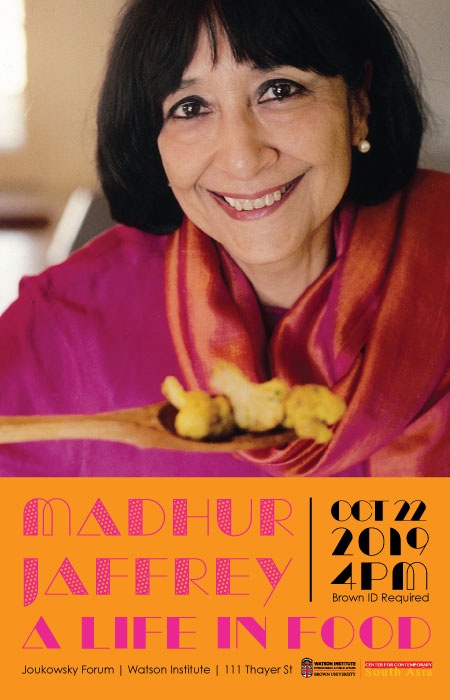 Regarded by many as the world authority on Indian food, Madhur Jaffrey is an award-winning actress and bestselling cookbook author. Her classic first book, An Invitation to Indian Cooking, was published by Alfred A. Knopf in 1973, and she has gone on to write more than 15 other books. Her memoir, Climbing the Mango Trees, is both an enormously appealing account of a childhood in India and a testament to the power of food to prompt memory, vividly bringing to life a lost time and place.

Madhur Jaffrey has been named to the Who’s Who of Food and Beverage in America by the James Beard Foundation—six of her books have won James Beard Awards—and she was the host of a series, Madhur Jaffrey’s Indian Cookery, for BBC television.  Her newest cookbook, At Home with Madhur Jaffrey, makes it possible for anyone to enjoy the delectable flavors of Indian cuisine with simple dishes from India, Pakistan, Bangladesh, and Sri Lanka. By deconstructing age-old techniques, she opens the world of Indian cooking to anyone who wants to incorporate seemingly exotic dishes into everyday meals.

As an actress she has appeared in more than twenty films, including Merchant Ivory’s Heat and Dust. Her latest film is Today’s Special (2009), co-starring Aasif Mandvi.