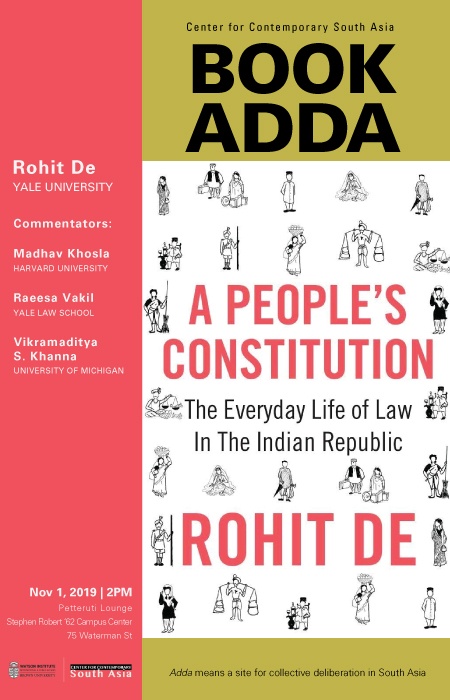 Rohit De is a lawyer and historian of modern South Asia and focuses on the legal history of the Indian subcontinent and the common law world.  As a legal historian he moves beyond asking what the law was; to what actors thought law was and how this knowledge shaped their quotidian tactics, thoughts and actions. In recent years, this has enabled his research to move beyond the political borders to South Asia to uncover transnational legal geographies of commerce, migration and rights across Africa, Southeast Asia and the Carribean.

Professor De’s book A People’s Constitution: Law and Everyday Life in the Indian Republic(Princeton University Press) explores how the Indian constitution, despite its elite authorship and alien antecedents, came to permeate everyday life and imagination in India during its transition from a colonial state to a democratic republic. Mapping the use and appropriation of constitutional language and procedure by diverse groups such as butchers and sex workers, street vendors and petty businessmen, journalists and women social workers, it offers a constitutional history from below. He continues to write on the social and intellectual foundations of constitutionalism in South Asia.

Commentators:
Madhav Khosla is a junior fellow at the Harvard Society of Fellows. Khosla’s interests range across the fields of public law and political theory, and his books include India’s Founding Moment: The Constitution of a Most Surprising Democracy (Harvard University Press, 2020).

Raeesa Vakil is a J.S.D. candidate at Yale Law School, where she earned her LL.M. degree in 2016. Previously, she was a research scholar at the Centre for Policy Research, New Delhi, where she worked on issues concerning local government and Indian constitutional law.

Vikramaditya S. Khanna is the William W. Cook Professor of Law at the University of Michigan. He is also faculty director of the Directors' College for Global Business and Law and codirector of the Joint Centre for Global Corporate and Financial Law & Policy, a collaboration between Michigan Law and India's Jindal Global Law School.