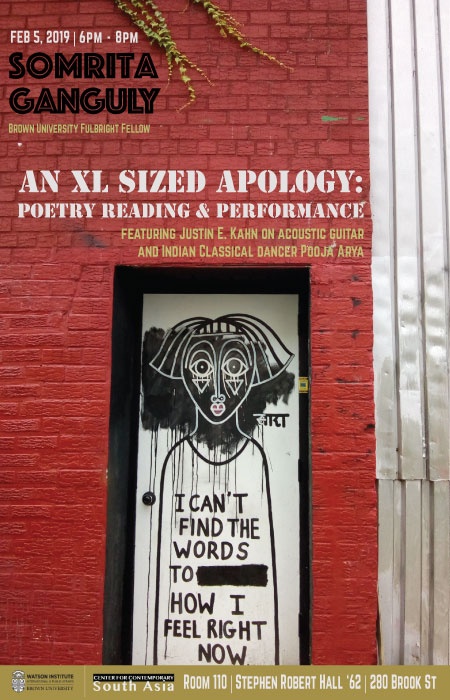 Free & Open to the Public

Somrita Urni Ganguly is a professor, poet, and literary translator, presently affiliated with Brown University, Rhode Island, as a Fulbright doctoral research fellow. She has taught British Literature to undergraduate students in Delhi and Calcutta, and translates from Bengali and Hindi to English. She was selected by the National Centre for Writing, UK, as an emerging translator in 2016. She has been invited as translator-in-residence at Cove Park, Scotland, in October 2017, and in December 2017 she was invited as poet-in-residence at Arcs of a Circle, Mumbai, an artistes’ residency organized by the US Consulate in Bombay. Somrita’s work has been showcased at the 2017 London Book Fair and she has been published in Asymptote, Words Without Borders, In Other Words, and Muse India, among others.

Somrita has presented research papers on translation, the poetics and politics of street art, and gender studies at various national and international conferences in India, Singapore, UK, and USA. She has thirteen academic publications to her credit and is a recipient of the Jawaharlal Nehru Memorial Fund Award (2013) and the Sarojini Dutta Memorial Prize (2011).

Justin E. Kahn plays a range of instruments: ukulele, banjo, guitars, drums, and keyboards. His acoustic music and electronic productions can be sampled on @SoundCloud.com/maasss
Pooja Arya is a Fulbright Foreign Language Teaching Assistant in Hindi at Brown University this semester and is passionate about yoga and Indian classical and folk dance forms.