Zia Mian – Crossing the Line: Kashmir, Pakistan and India Under the Nuclear Shadow 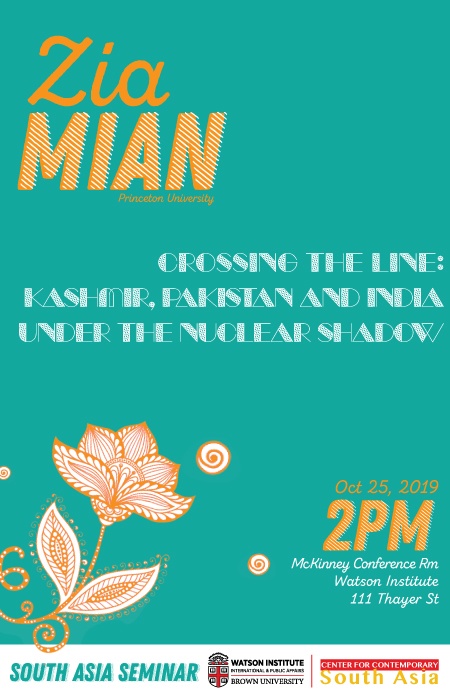 Zia Mian is a physicist and co-director of Princeton University's  Program on Science and Global Security, part of the Woodrow Wilson School of Public and International Affairs, where he has worked since 1997. He also directs the Program's Project on Peace and Security in South Asia. His research interests include issues of nuclear arms control, nonproliferation and disarmament and international peace and security. He is co-editor of Science & Global Security, the international technical journal of arms control, nonproliferation and disarmament and also co-chair of the International Panel on Fissile Materials (IPFM), an eighteen-country independent group of experts working to strengthen policy initiatives to end production and eliminate stockpiles of plutonium and highly enriched uranium, the key ingredients for nuclear weapons. In addition to his scholarly articles, he is the co-author of Unmaking the Bomb (MIT Press, 2014) and editor of several books and has made two documentary films on peace and security in South Asia. He received the 2014 Linus Pauling Legacy Award for “his accomplishments as a scientist and as a peace activist in contributing to the global effort for nuclear disarmament and for a more peaceful world.” He received the American Physical Society’s 2019 Leo Szilard Award “For promoting global peace and nuclear disarmament particularly in South Asia, through academic research, public speaking, technical and popular writing and organizing efforts to ban nuclear weapons."