Atul Kohli — Imperialism and the Developing World: How Britain and the United States Shaped the Global Periphery 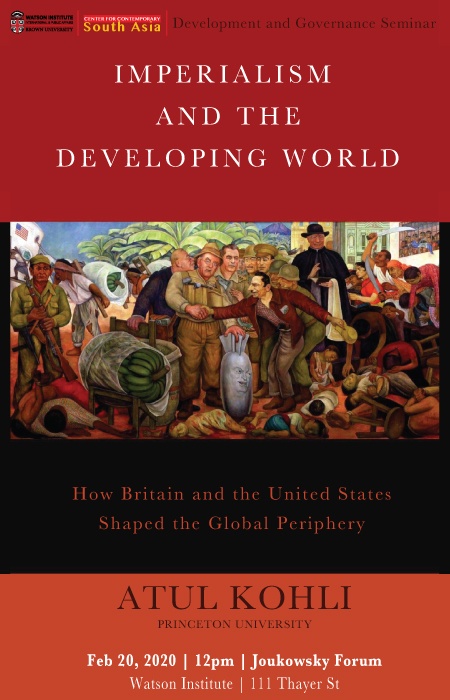 Atul Kohli is the David K.E. Bruce Professor of International Affairs at Princeton University. He is the author of several books, including Poverty amid Plenty in the New India, which was a Foreign Affairs Best Book of 2012 on Asia and the Pacific, and State-Directed Development, winner of the 2005 Charles Levine Award of the International Political Science Association. He served as the chief editor of the journal World Politics from 2006-13 and was Vice President of the American Political Science Association during 2009-10.

How did Western imperialism shape the developing world? In Imperialism and the Developing World, Atul Kohli tackles this question by analyzing British and American influence on Asia, Africa, the Middle East, and Latin America from the age of the British East India Company to the most recent U.S. war in Iraq. He argues that both Britain and the U.S. expanded to enhance their national economic prosperity, and shows how Anglo-American expansionism hurt economic development in poor parts of the world.

To clarify the causes and consequences of modern imperialism, Kohli first explains that there are two kinds of empires and analyzes the dynamics of both. Imperialism can refer to a formal, colonial empire such as Britain in the 19th century or an informal empire, wielding significant influence but not territorial control, such as the U.S. in the 20th century. Kohli contends that both have repeatedly undermined the prospects of steady economic progress in the global periphery, though to different degrees.

Time and again, the pursuit of their own national economic prosperity led Britain and the U.S. to expand into peripheral areas of the world. Limiting the sovereignty of other states-and poor and weak states on the periphery in particular-was the main method of imperialism. For the British and American empires, this tactic ensured that peripheral economies would stay open and accessible to Anglo-American economic interests. Loss of sovereignty, however, greatly hurt the life chances of people living in Asia, the Middle East, Africa, and Latin America. As Kohli lays bare, sovereignty is an economic asset; it is a precondition for the emergence of states that can foster prosperous and inclusive industrial societies.

Co-sponsored by the Development and Governance Seminar