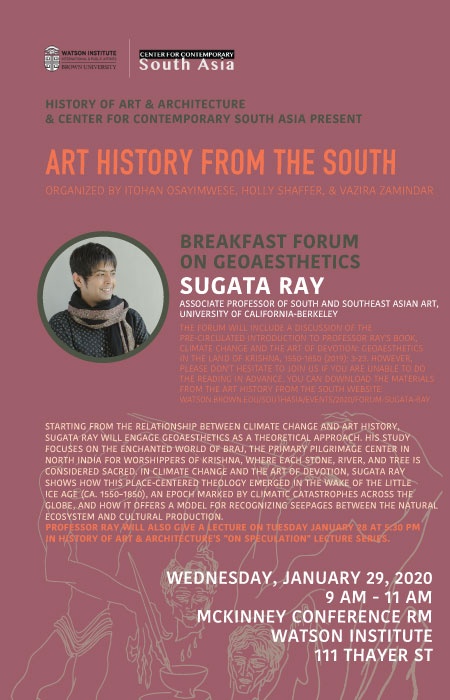 Trained in both history (Presidency College; Centre for Studies in Social Sciences, Calcutta) and art history (Maharaja Sayajirao University, Baroda; University of Minnesota), Sugata Ray’s research focuses on the intersections among early modern and colonial artistic cultures, transterritorial ecologies, and the natural environment. His first book, Climate Change and the Art of Devotion: Geoaesthetics in the Land of Krishna, 1550–1850 (Global South Asia Series, University of Washington Press, 2019), examined the interrelationship between matter and life in shaping creative practices in the Hindu pilgrimage site of Braj during the ecocatastrophes of the Little Ice Age (ca. 1550–1850). As an extension of his interest in the field of eco art history, Ray has coedited Ecologies, Aesthetics, and Histories of Art (2019; with Gerhard Wolf and Hannah Baader, Kunsthistorisches Institut in Florenz - Max-Planck-Institut) and Water Histories of South Asia: The Materiality of Liquescence (2018; with Venugopal Maddipati, Ambedkar University, Delhi).

Sugata Ray’s current book project, provisionally titled Matter, Material, Materiality: Indian Ocean Art Histories in the Early Modern World, focuses on the global trade in exotica, natural resources, and luxury objects that shaped ecocultural perceptions of the Indian Ocean in the early modern period. In the past, Ray has published essays on theories of collecting and archiving, postcolonial theory, and methodologies for a global art history in journals such as Art History and The Art Bulletin. His 2016 essay on the collecting of Islamic art in the United States was awarded the Historians of Islamic Art Association’s Margaret B. Ševčenko Prize. Ray has recently guest edited a special issue of Ars Orientalis (2018) on translations, terminologies, and global art history.

Sugata Ray, "Introduction" in Climate Change and the Art of Devotion: Geoaesthetics in the Land of Krishna, 1550-1850 (Seattle: University of Washington Press, 2019): 3-23. If you would like to read more, please consult the e-book.

Professor Ray will also give a lecture on Tuesday, January 28 at 5:30 pm in the History of Art & Architecture’s “On Speculation” lecture series.