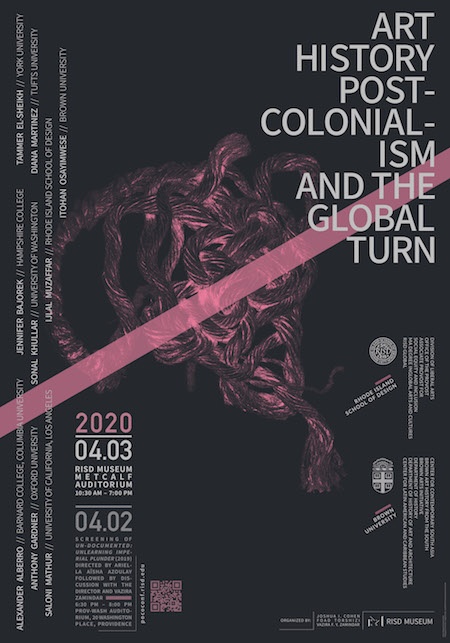 As attention turns increasingly toward the “global” in art history, has postcolonialism fallen into obsoles-
cence? Although touted as liberating, does the new “global” dispensation mark a rupture with history?
What shall become of the generative critical theory that emerged in the 1980s and ‘90s, which partly grew
out of reﬂections on anticolonial movements and post-independence nation-building? At best, global art
history signals a germane awareness of “post-postcolonial” conditions precipitated by the accelerating
globalization of ﬁnance capitalism. But would proponents of global contemporary art rather applaud pu-
tatively post-national freedoms than reckon with globalization’s deep disadvantages, while jettisoning the
postcolonial as an allegedly outmoded product of elite theory?

This symposium asks whether, or to what degree, postcolonial discourses stand to be recuperated and re-
vised in 21st-century art history, architectural history, visual studies, and art criticism. In cases where po-
litical alliances have frayed and nascent national governments foundered, radical politics have sometimes
given way to disillusionment, while transnationalism, hybridity, and self-fashioning settle in as new
norms. For some in the Global South, “postcolonial” may indeed appear misleading as an overall designa-
tion. Nevertheless, what could be the implications of moving past postcolonialism as we arguably celebrate
a cosmopolitan world that has yet to be fully realized? With neoliberalism giving rise to what art historian
Anthony Gardner has called “a resurgent focus on North Atlantic relations,” what would be the cost of
letting the postcolonial slip away?

In other words, what does the early 21st-century—so distant from the heyday of anticolonialism associ-
ated with Third World independence and liberation movements—hold for the practices and ambitions of
artists, scholars, and critics? How have contemporary artists accommodated and/or resisted the demands
of the global art world? What have the recent shifts in discourse meant—or what could they mean—for
scholarly and curatorial (re)readings of chronologically staggered periods of culture clash and decoloni-
zation, including the possibilities, and failures of each moment? How might an ongoing or renewed “post-
colonial” artistic output exceed the conﬁnes of galleries, biennials, art fairs, and museums? Do new inter-
ests in the “global” inevitably come at the expense of the postcolonial? Are the phenomena in question
truly taking place on a global scale? Have scholars and artists from the Global South explored diﬀerent
terms and frameworks to structure their pursuits? To what extent are political limitations determined by
working relationships with art institutions and their particular forms of patronage?

This symposium invites artists, critics, curators, and scholars to query the state of postcolonialism in mod-
ern and contemporary art. Does (or should) the postcolonial retain relevance? Or how might it regain
relevance? In what ways must new projects challenge the orthodoxies, binaries, and narratives of earlier
discourses?

In support of our community's continued health, if you are not feeling well for any reason, please consider staying home rather than attending the event. For up-to-date information, including campus travel restrictions, please visit the University’s COVID-19 Updates website.