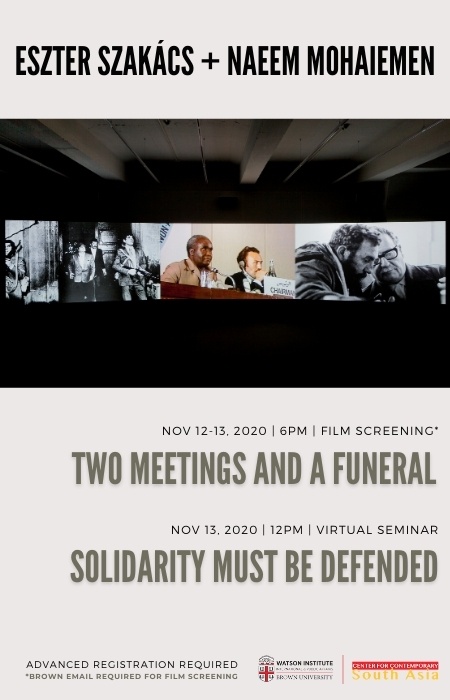 Eszter Szakács is a curator and researcher. She is a PhD candidate in the project IMAGINART—Imagining Institutions Otherwise: Art, Politics, and State Transformation at the Amsterdam School for Cultural Analysis at the University of Amsterdam. Previously she worked at tranzit.hu Budapest, where she has been co-editor of the online international art magazine Mezosfera, co-editor of the book IMAGINATION/IDEA: The Beginning of Hungarian Conceptual Art – The László Beke Collection, 1971 (tranzit.hu, JRP|Ringier, 2014), and curator of the collaborative research project Curatorial Dictionary. In 2018, she organized at tranzit.hu the Hungarian premiere of Two Meetings and a Funeral (Mohaiemen 2017) and is co-editor with Naeem Mohaiemen of anthology Solidarity Must Be Defended (tranzit.hu – Van Abbemuseum – SALT – Tricontinental – Asia Culture Center). She is a curatorial team member of the grassroots art initiative OFF-Biennale Budapest. Her research and practice revolve around prefigurative politics in art organizing, questions of internationalisms, relations between Eastern Europe and the Global South, as well as the exhibitionary form of research.

Watch the film, Two Meetings and a Funeral, before the talk. A link to stream the film will be available from Thursday, November 12th at 6pm until Friday, November 13th at 6pm.