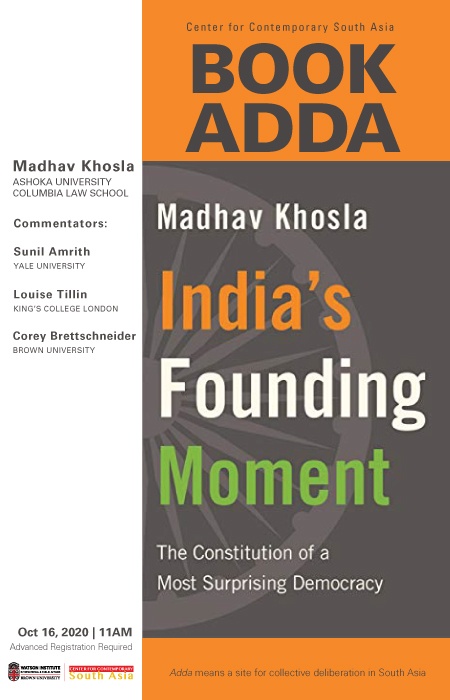 Madhav Khosla is an Associate Professor of Political Science at Ashoka University, the Ambedkar Visiting Associate Professor of Law at Columbia University, and a Junior Fellow at the Harvard Society of Fellows. He studied political theory at Harvard University, where his dissertation was awarded the Edward M. Chase Prize for "the best dissertation on a subject relating to the promotion of world peace", and law at Yale Law School and the National Law School of India University, Bangalore. Khosla’s interests range across the fields of public law and political theory, and much of his work is on the theory and practice of constitutionalism under conditions of rapid democratization, weak state capacity, and low levels of socio-economic development. His work has been cited by courts in India and Pakistan.

In India's Founding Moment, Khosla explores the means India’s founders used to foster a democratic ethos. They knew the people would need to learn ways of citizenship, but the path to education did not lie in rule by a superior class of men, as the British insisted. Rather, it rested on the creation of a self-sustaining politics. The makers of the Indian Constitution instituted universal suffrage amid poverty, illiteracy, social heterogeneity, and centuries of tradition. They crafted a constitutional system that could respond to the problem of democratization under the most inhospitable conditions. On January 26, 1950, the Indian Constitution―the longest in the world―came into effect.