Mohamad Junaid & Samreen Mushtaq — Kashmir In the Time of COVID-19 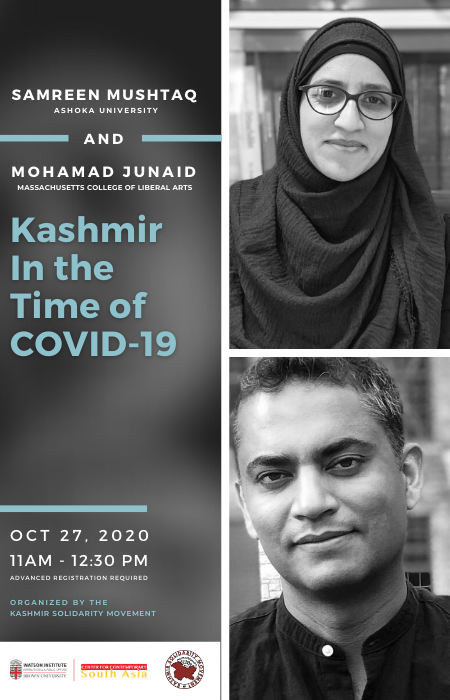 On August 5th of last year, the Indian government revoked Jammu and Kashmir’s semi-autonomous status as enshrined under Article 370 and 35(A) of the Indian constitution. The revokal was accompanied by a massive increase in military troop presence, a cancellation of all mobile and internet services, a spate of raids on houses, and imprisonments of civilians. Additionally, the abrogation of Article 35(A) was followed by the introduction of a new domicile law, which allowed Indian citizens who had been living or working in Jammu and Kashmir (J&K) for over 15 years to claim permanent residence through a ‘domicile certificate’. These measures added anxieties of demographic change and loss of livelihood to Kashmiris’ already curtailed and surveilled lives.

The COVID-19 pandemic has thus entered into an occupied J&K where infrastructure of control and surveillance is vast while infrastructure for an already fragile healthcare system is weak. Doctors and medical professionals have complained about the limited number of ambulances, staff, and protective equipment, but their efforts have been strained by the curtailed 4G connectivity. Additionally, the ballooning prison population — which now includes minors, ill and elderly folks — renders detainees increasingly susceptible to COVID outbreaks. Instead of addressing these issues, however, the Indian state has chosen to intensify its occupation in various ways. Since the pandemic started, the army has reportedly burnt down houses in downtown Srinagar, claimed innocent civilian lives in ‘fake encounters’, and censored journalists who are reporting from the ground.

Come join us in this conversation with Professor Mohamad Junaid and Dr. Samreen Mushtaq as we explore what has changed and what has remained unchanged in Kashmir in the time of COVID-19.

Mohamad Junaid is an Assistant Professor of Antropology at Massachusetts College of Liberal Arts. He is interested in the production of knowledge about “South Asia,” the centering of India in that knowledge, and the consequences for those who live in its political, social and geographical margins. Informed in important ways by his lived experiences in the US, India and Kashmir, he engages questions about colonial continuities in postcolonial state formation, aporias of democracy and self-determination, history and memory, space and place, and visual logics of geopolitics.

Samreen Mushtaq is a recent PhD in Political Science from Jamia Millia Islamia, and a Research Fellow at the Centre for Studies in Gender and Sexuality at Ashoka University. Prior to joining the Centre, she worked at The Hindu Centre for Politics and Public Policy, and Mobile Creches. Her research and writing focuses on gender and armed conflict, specifically on Kashmir, and sexual violence as a weapon of war.

This event is organized by Brown's Kashmiri Student Movement.