Niloufer Siddiqui — Under the Gun: Explaining Party Violence in Karachi 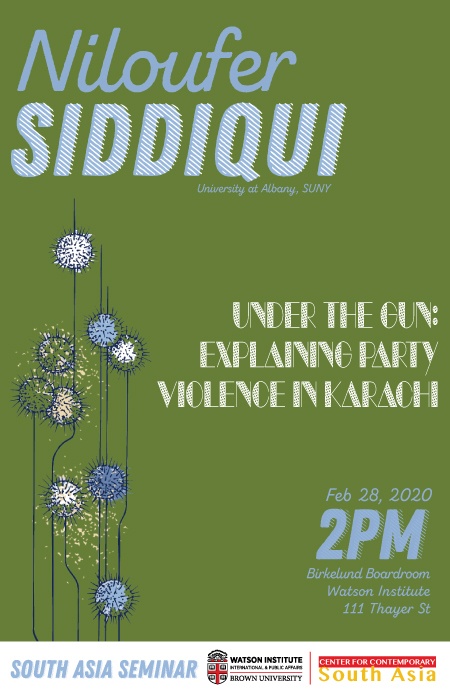 Political parties frequently engage in violent behavior, despite evidence that voters punish parties that do so. Why then do parties employ violence? And why do some parties engage in violence directly while others choose to do so through intermediaries? I argue that party violence is a joint function of the distribution of a party’s electoral support, which determines its incentives for particular violence strategies, and its internal organization, which determines its capacity for violence. This paper focuses on two cases in the ethnically-divided megacity of Karachi, Pakistan, that of the Muttahida Qaumi Movement—which orchestrates violence directly through its own cadres—and the Pakistan People’s Party—which outsources violence to distinct specialists. I support my argument using a combination of novel survey experimental and qualitative evidence, including interviews with political party members, elected officials, and police and intelligence officials.

Niloufer Siddiqui is an assistant professor of political science at the Rockefeller College of Public Affairs and Policy, University at Albany-State University of New York (SUNY). Prior to this, she was a post-doctoral fellow in the same department (2017-2018). Her book project examines why political parties in Pakistan engage in violence and the variation in violence strategies that they employ. Her other research interests include political behavior, the politics of religion and ethnicity, voters and foreign policy, and the politics of South Asia. Her work has been published or is forthcoming in the American Political Science Review, Conflict Management and Peace Science, Party Politics, and Politics & Religion.

Siddiqui previously worked at the International Crisis Group (ICG) and the International Organization for Migration (IOM) in Islamabad and the American Civil Liberties Union (ACLU) in New York. She have a PhD in Political Science from Yale University, an M.A. in International Relations from the Johns Hopkins School of Advanced International Studies, and a B.A. in English from Haverford College.