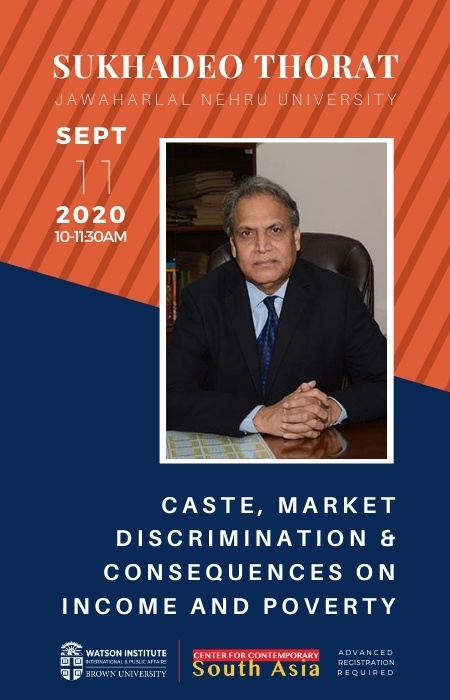 Sukhadeo Thorat is an economist by training who has worked extensively on issues related to rural poverty and agricultural growth, marginalised groups, the caste system, the cause of dalits, tribes, de-notified tribes, minorities, and education, through writings, lectures delivered and helping several dalits and other organizations. He has research specialization in agricultural development, economic institutions and development, poverty, social exclusion and inequalities linkages, economics of caste system, caste and economic discrimination, market discrimination, labour market discrimination, economic problem of excluded groups, such as Scheduled Castes and Scheduled Tribes, economic Ideas of Babasaheb Ambedkar and Human Rights and Urban slum, Ambedkar’s economic thoughts and Higher education in his previous roles at Jawaharlal Nehru University (1973-2014) and as the Director of the Indian Institute of Dalit Studies (2003-2006).

He was the founder and Director of the Indian Institute of Dalit Studies. He was also Chairman of the University Grants Commission (2006-2011) and of Indian Council of Social Science Research (2011-2017). He has been awarded Honorary D.Litt, D.Sc, D.S. (Doctor of Education) and LLD Degrees by twelve Universities from India and one University from outside India. He has published 19 books and about 100 research Papers. In 2008, Prof Thorat was awarded the Padma Shri, India’s fourth-highest civilian award, Mother Teresa International Award, recently Babasaheb Ambedkar Ratna Award by Delhi government for his dedication and extraordinary contributions on the works and thoughts of Dr Ambedkar.