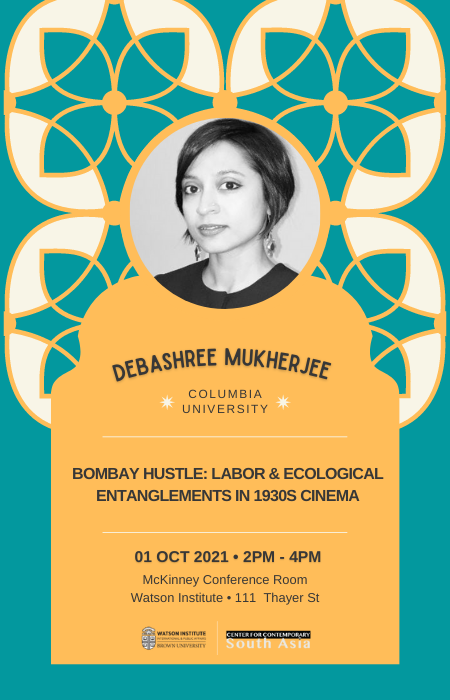 Debashree Mukherjee (Columbia University) is a film historian and media theorist working across the fields of production studies, new materialisms, feminist film historiography, postcolonial studies, and South Asian studies. Her current book project, Bombay Hustle: Making Movies in a Colonial City (forthcoming with Columbia University Press), presents a practice-oriented history of the consolidation of the Bombay film industry in the 1930s. The book investigates the material relations between cinema’s bodies, machines, aesthetics, and environments as they intersect with practices of modernity and freedom in late colonial India.

Professor Mukherjee has published in various academic journals and anthologies with a sustained interest in cities, labor, gender, and media. Trained as a filmmaker, she worked in Bombay’s film and television industries from 2004-2007 on projects such as Omkara (dir. Vishal Bhardwaj, 2006). During this period she was also engaged in an ethnographic research project on cultures of contemporary film production initiated by Sarai-Center for the Study of Developing Societies, New Delhi. Since 2015, Professor Mukherjee is a core editor with the peer-reviewed journal, BioScope: South Asian Screen Studies.