Interpreting the Pew Report on Religions in India: A Discussion with Neha Sahgal 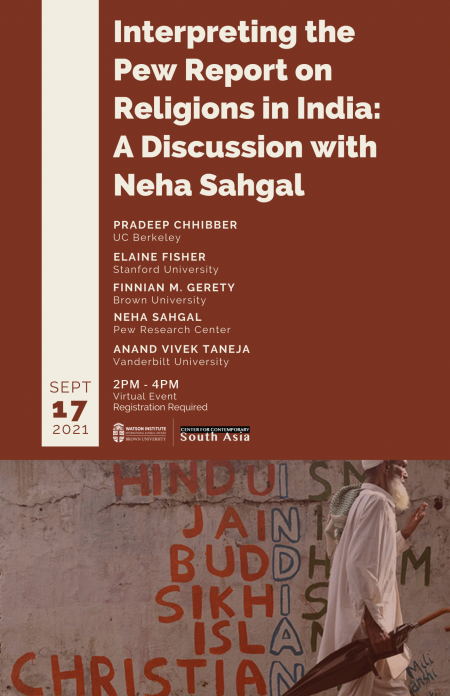 Join us for a panel discussion of the recent Pew Research Center's report on Indan religions, Religions in India: Tolerance and Segregation.

Panel:
Pradeep Chhibber is a Professor of Political Science and Indo-American Community Chair in India Studies at UC Berkeley. Chhibber studies the politics of India, political parties and party systems. His recent research is on the influence of ideology on party system change, religion and politics, elections and parties, and the politics of development in India.

Elaine Fisher is a scholar of South Asian religions and Assistant Professor in the Department of Religious Studies at Stanford University. A specialist in the Śaiva traditions of peninsular India, her research reconstructs notions of religious subjectivity and the religious public in early modern Hinduism.

Neha Sahgal is associate director of research at Pew Research Center, specializing in international polling on religion. Sahgal is involved in all aspects of survey research, including designing the questionnaire, monitoring field work, evaluating data quality and analyzing results. She is an author of studies on the religious beliefs and practices of Muslims around the world, Christian-Muslim relations in sub-Saharan Africa, religion in Latin America, religious divisions in Israel, religion and national identity in Central and Eastern Europe and the role of religion in Western Europe.

Anand Vivek Taneja, is an Assistant Professor of Religious Studies, Islamic Traditions of South Asia at Vanderbilt University. Taneja's research and teaching focuses on the religious and cultural traditions of South Asia, specializing in the anthropological study of contemporary Islam, Indian popular culture, and inter-religious relations between Muslims and Hindus. His work focuses on emergent shrines, ethical formations, and new religious, literary, and cultural expression in the contemporary landscape of urban north India.

About the Report:
This study is Pew Research Center’s most comprehensive, in-depth exploration of India to date. For this report, we surveyed 29,999 Indian adults (including 22,975 who identify as Hindu, 3,336 who identify as Muslim, 1,782 who identify as Sikh, 1,011 who identify as Christian, 719 who identify as Buddhist, 109 who identify as Jain and 67 who identify as belonging to another religion or as religiously unaffiliated). Interviews for this nationally representative survey were conducted face-to-face under the direction of RTI International from Nov. 17, 2019, to March 23, 2020. To improve respondent comprehension of survey questions and to ensure all questions were culturally appropriate, Pew Research Center followed a multi-phase questionnaire development process that included expert review, focus groups, cognitive interviews, a pretest and a regional pilot survey before the national survey. The questionnaire was developed in English and translated into 16 languages, independently verified by professional linguists with native proficiency in regional dialects. Respondents were selected using a probability-based sample design that would allow for robust analysis of all major religious groups in India – Hindus, Muslims, Christians, Sikhs, Buddhists and Jains – as well as all major regional zones. Data was weighted to account for the different probabilities of selection among respondents and to align with demographic benchmarks for the Indian adult population from the 2011 census. The survey is calculated to have covered 98% of Indians ages 18 and older and had an 86% national response rate.