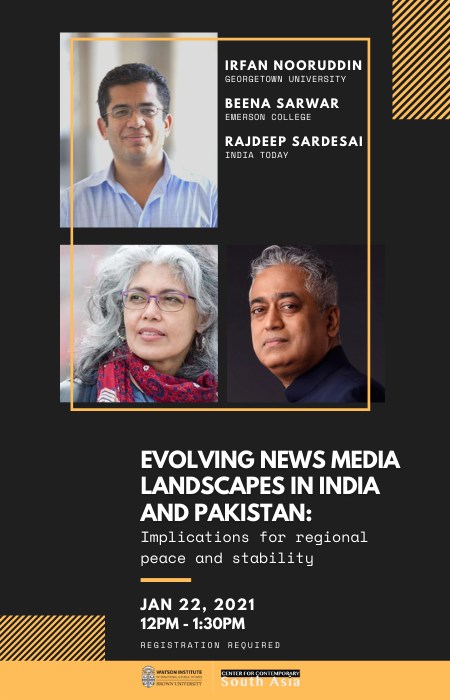 Join us to discuss the findings of Nooruddin's August 2020 Atlantic Council report, "Evolving news media landscapes in India and Pakistan," which he co-authored with Fatima Salman.

India and Pakistan recognize the utility of the press in contemporary conflicts, and seek to deploy it as an offensive weapon in a larger information war. Both countries have utilized digital, print, and broadcast media to shape international perceptions and public opinion domestically. With every new border skirmish, New Delhi and Islamabad ramp up a nationalist narrative, with news media outlets and journalists riling up jingoistic fervor with every newscast. Understanding India and Pakistan’s laws and policies regarding mass media explains today’s government-media nexus.

Between 2018 and 2020, the region witnessed a surge in violations of press freedom. High levels of threats, intimidation, and attacks on journalists and their media outlets have led to both India and Pakistan languishing at the bottom of the 2020 Press Freedom Index. This report is a culmination of a two-year effort to convene journalists from both India and Pakistan for cross-border exchanges and dialogue. Field interviews with journalists based in New Delhi, Mumbai, Islamabad, Karachi, and Lahore have helped generate the bulk of the findings we report here, including our analysis of their implications and our proposals for a path forward for news media in the region.

Irfan Nooruddin is the Hamad bin Khalifa Al-Thani Professor of Indian Politics in the Walsh School of Foreign Service at Georgetown. He is the author of Elections in Hard Times: Building Stronger Democracies in the 21st Century (with T.E. Flores, Cambridge, 2016) and Coalition Politics and Economic Development: Credibility and the Strength of Weak Governments (Cambridge, 2011). Dr. Nooruddin specializes in the study of comparative economic development and policymaking, democratization and democratic institutions, and international institutions. He has been a Fellow at the Woodrow Wilson International Center for Scholars in Washington, DC, and is a Team Member with Lokniti: Programme on Comparative Democracy at the Centre for the Study of Developing Societies, New Delhi.

Beena Sarwar  is a multi-media journalist, editor and documentary filmmaker from Pakistan who focuses on human rights, gender, media, peace, extremism, violence and South Asia. She currently teaches journalism at Emerson College. She has been an editor with major print and television news outlets in Pakistan, and has trained and mentored numerous journalists in the field since the 1990s. She has taught journalism at Princeton University, Brown University, and Harvard Summer School. She contributes news and commentary to media outlets around the world including New York Times, Guardian, Boston Globe, Al Jazeera, BBC, CNN, VOA and NPR.

Rajdeep Sardesai is a senior journalist and author of the best-selling book, '2014: The Election that Changed India'. With 26 years of journalistic experience in print and TV, Sardesai was managing editor of the NDTV network before he set up the IBN 18 network with channels like CNN IBN as founder editor. He began his career with the Times of India and was the city editor of its Mumbai edition at the age of 26. He is presently a consulting editor with the India Today Group and anchors a prime time show on India Today.