Uday Mehta — Critiquing Empire and the Challenge of Representation: Gandhi and the Nationalists 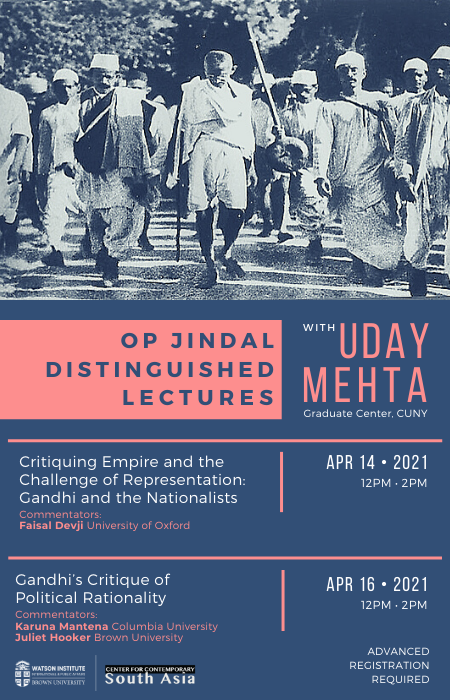 Uday Singh Mehta is a renowned political theorist whose work encompasses a wide spectrum of philosophical traditions and issues, including the relationship between freedom and imagination, liberalism’s complex link with colonialism and empire, and, more recently, war, peace, and nonviolence. He is the author of two books, The Anxiety of Freedom: Imagination and Individuality in the Political Thought of John Locke (1992) and Liberalism and Empire: Nineteenth Century British Liberal Thought (2000), which won the J. David Greenstone Book Award from the American Political Science Association in 2002 for the best book in history and theory. In 2002, he was one of ten recipients of the “Carnegie Scholars” prize awarded to “scholars of exceptional creativity.” He is currently completing a book on M. K. Gandhi’s critique of political rationality.

Mehta received his undergraduate education at Swarthmore College, where he studied mathematics and philosophy, and holds a Ph.D. in political philosophy from Princeton University. He has held teaching positions at a number of universities, including Princeton, Cornell, MIT, University of Chicago, University of Pennsylvania, and Hull. He came to the Graduate Center in the fall of 2010 from Amherst College, where he served as Clarence Francis Professor in the Social Sciences.