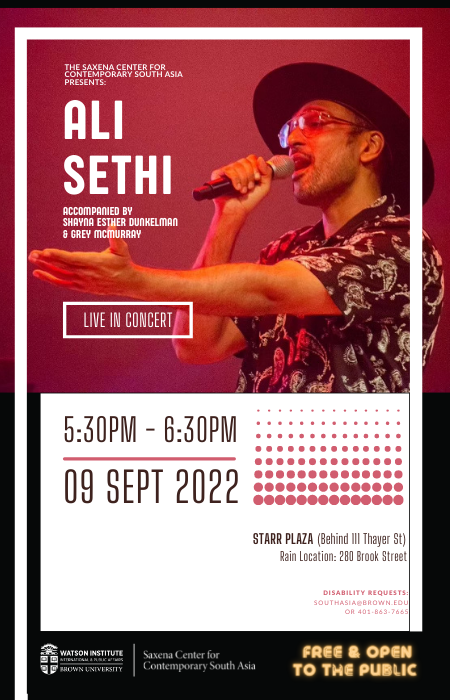 Free & Open to the Public

Join us for a concert with Ali Sethi accompanied by Shayna Esther Dunkelman and Grey McMurray.

Ali Aziz Sethi is a Pakistani singer, songwriter, composer, and author. Sethi rose to prominence with his debut novel, The Wish Maker (2009). In 2012, Sethi began focusing on his musical career and made his film debut as a singer in Mira Nair's 2012 film, The Reluctant Fundamentalist, with the song Dil Jalane Ki Baat Karte Ho. In recent years, Sethi has released numerous cover singles and has appeared on several seasons of Coke Studio Pakistan. Sethi began releasing original music in 2019 and has collaborated with Grammy-winning producer Noah Georgeson. His most recent single for Coke Studio –  Pasoori  (2022) – became the first Pakistani song to feature on Spotify's "Viral 50 - Global" chart,  eventually climbing to the top of the chart in May 2022.   Sethi is known for combining his live musical performances with historical narrative and critical commentary.