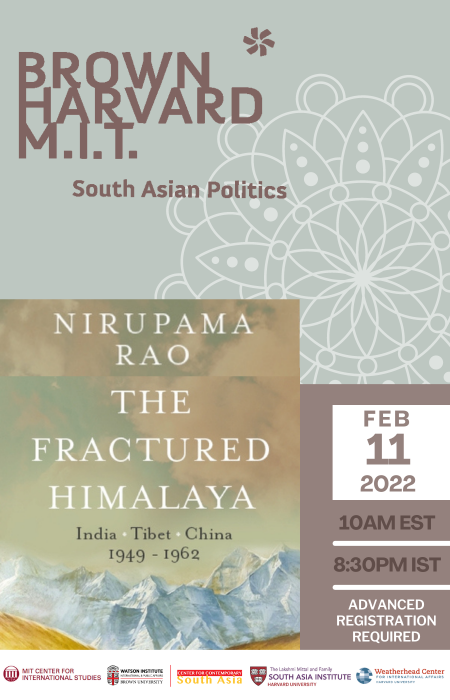 Nirupama Rao, a former Foreign Secretary of India, unknots this intensely complex saga of the early years of the India-China relationship. As a diplomat-practitioner, Rao’s telling is based not only on archival material from India, China, Britain and the United States, but also on a deep personal knowledge of China, where she served as India’s Ambassador. In addition, she brings a practitioner’s keen eye to the labyrinth of negotiations and official interactions that took place between the two countries from 1949 to 1962 to ellucidate why it is necessary to understand the trans-Himalayan power play of India and China in the formative period of their nationhoods.

Born in Kerala, India, Nirupama Rao, joined the Indian Foreign Service in 1973. During her four-decade-long diplomatic career she held several important assignments. She was India’s first woman spokesperson in the Ministry of External Affairs, New Delhi, the first woman high commissioner from her country to Sri Lanka, and the first Indian woman ambassador to the People’s Republic of China. She served as India’s Foreign Secretary from 2009-2011. At the end of that term, she was appointed India’s Ambassador to the United States where she served for a term of two years from 2011-2013.

On her retirement from active diplomatic service, Ambassador Rao entered the world of academics with an appointment as Meera and Vikram Gandhi Fellow at the India Initiative at Brown University in Providence, Rhode Island.  Ms. Rao has continued to pursue her academic interests and  taught an undergraduate seminar at Brown University titled "India in the World" in 2015 and 2016.

In retirement, Ambassador Rao has also pursued her passion for music. Her first commercial album, entitled "Peace is My Dream", produced by the Peninsula Studios in New Delhi,  was released in December 2017 by the Universal Music Group (India) label and can be digitally accessed on iTunes (India) , Saavn.com and Spotify. Rao is also a published poet. Her book of poems, "Rain Rising", published by Rupa & Co., a Delhi-based publishing house, was published in 2004.

In the Summer of 2018, Ambassador Rao and her husband Sudhakar,  set up a Bangalore-based Trust called The South Asian Symphony Foundation to further the cause of peace and mutual understanding in South Asia through the medium of music.  The  website of the Foundation may be accessed by clicking here.